Could dinosaurs still be alive somewhere? 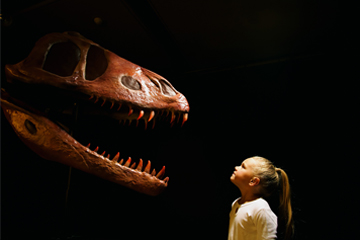 That's a meeting that would not have ended well if humans and dinosaurs had coexisted.
Britt Erlanson/Getty Images

Well, sure. Dinosaurs could totally be alive ... somewhere. Maybe on some alien planet, somewhere in a far-off galaxy. Or maybe on our planet, but only in a multiverse with a planet exactly like our own -- except your neighbor is a Triceratops instead of a Web developer. Sounds fun!

And let's just get it out of the way now that there's no Spielberg-like land on Earth where dinosaurs secretly roam (at least, there's no compelling evidence for it). But that doesn't mean that we aren't actually surrounded by creatures that -- if not dinosaurs themselves -- were contemporaries with the extinct animals. But before we get to these living fossils in our midst, let's at least have a look at some rumored recent sightings of ancient beasts in the wild.

The first? Megalodon, the behemoth that ruled the sea. They're related to the present-day and very much alive mako shark, but these guys could grow 50 feet (15 meters), with a bite force stronger than that of the Tyrannosaurus rex. And in 2014, everyone got really excited when a television documentary claimed that evidence existed that megalodon was still cruising the ocean. Everyone, that is, except for any paleontologist or scientist, because there's literally no debate in the academic community that megalodon is extinct. They've found loads of megalodon teeth, for one -- but none less than 1.5 million years old [source: Shiffman].

Much like megalodon, there are always rumors that beasts from Sasquatch to the Loch Ness monster are actually dinosaurs. Let's just make this easy and say that nobody has ever found any proof that these mythical creatures are genetically related to any Jurassic, Triassic or Cretaceous animal. (And it's always worth pointing out that nobody has found any proof that they exist, period.) Then there's the mokele-mbembe, which some people believe still roams the jungles of central Africa. While expeditions still take place to "find" the amphibious, Apatosaurus-like creature, they've all come up short. It's almost like this 35-foot (11-meter) modern dinosaur doesn't exist at all [source: Radford]!

But let's get excited about the real dinosaurs in our backyard. Remember that birds either have a common ancestor with dinosaurs or evolved alongside them -- a few just managed to survive the mass extinction about 66 million years ago [source: Brumfiel]. The aardvark has been on the fossil record for a whopping 55 million years, almost completely unchanged [source: Nosowitz]. And if you really want to find an ancient animal swimming in the ocean and the busted megalodon myth disappointed you, look no further than the elephant shark. It's the slowest-evolving vertebrate we've found and essentially hasn't changed for 420 million years -- 200 million years or so before dinosaurs even showed up [source: Borrell].

What's the Difference Between Sasquatch and Bigfoot?
Can a penny dropped off a building kill you?
Is Scattering Someone's Ashes Technically Considered Littering?