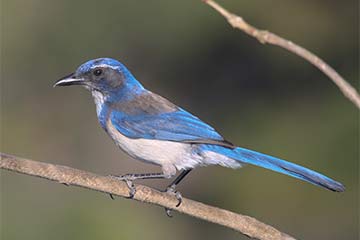 The Florida scrub jay is one bird species where some members act as helpers during the breeding season. Instead of mating themselves, the helpers assist the breeding pairs with getting food and fighting off predators.
Richard Rodvold/iStock/Thinkstock

There are plenty of examples in nature of altruistic behavior, but only a handful that seem to be clear examples of what evolutionary biologists called kin selection.

The Florida scrub jay is one of the best-studied examples of an organism that clearly favors its close blood relatives when exhibiting altruistic behavior. The Florida scrub jay is one of several bird species in which some members of the social group act as helpers during the breeding season. Instead of pairing up with their own mates, the helpers forgo reproduction and assist other breeding pairs with gathering food and protecting the nest from predators.

When a flock of Florida scrub jays was tagged and monitored over several generations, researchers found a significant preference for helper relationships between close family members. Of the 74 helper relationships observed, 48 helpers were assisting both of their biological parents, 16 helped a biological father, seven assisted a brother, two assisted a mother, and only one helped an unrelated stranger [source: Rausher].

Large colonies of certain ants, bees and wasps are other popular examples of kin selection at work. In many of these colonies, the queen is the only female that reproduces. Throngs of sterile female workers handle nearly every other task in the colony, from scouting and collecting food, to building the nest or hive, and raising the young. Since successive generations of these insects are born from the same mother, they are, in fact, sisters. This may explain the single-minded drive to feed and protect the young at the cost of their own reproduction.

Alarm calls are another popular example of altruistic behavior motivated by kin selection. In certain groups of closely related animals, such as squirrels and apes, members of the extended family will call out an alarm signal when a predator is within striking range. This warning call allows family members to flee from danger, while potentially drawing dangerous attention to the caller itself, therefore qualifying as altruistic behavior [source: Rausher].

Despite its logical and emotional appeal, kin selection does have its critics. Next we'll look at some of the strongest critiques of kin selection, including one from a pioneering evolutionary biologist.