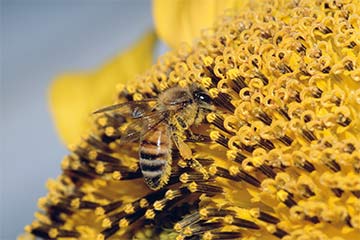 A honeybee collects pollen from a sunflower. Why do bees do all this work for the hive when they won’t have the chance to mate themselves? Kin selection has been advanced as the reason.
Frank Cezus/Photographer's Choice/Getty Images

There's a reason why plants and animals reproduce in far greater numbers than necessary to maintain their population: Most of those seeds, eggs and babies don't survive. When resources are scarce — food, light, water, mates — the slightest physical advantage may be the difference between life and death, extinction or reproduction [source: Montgomery].

During his exhaustive studies of diverse species from pigeons to barnacles, Darwin realized that variation is the engine of evolution. Even when the same two animals mate, their offspring exhibit noticeable variations in size, color and other physical traits.

If one of those random variations improves a plant or animal's chance of survival — sharper teeth or longer claws — then that trait is more likely to be passed on to the next generation. Likewise, if a random variation improves the chance of successful mating and reproduction — like colorful plumage to attract mates — then the genes for that trait are more likely to be passed on.

In this way, evolution is the sum of billions of "choices." There is logic to these choices, but it's a cruel one — survival of the fittest.

Evolutionary biologists measure an organism's "fitness" by its ability to reproduce. An individual that passes its genetic material to 20 offspring during its lifetime is more reproductively fit than another member of the same species that only produces 13 offspring. By that logic, an individual that has no offspring has a fitness level of zero — congratulations, you've been kicked out of the gene pool!

Or maybe not. What if there's a mechanism within natural selection that not only rewards the strongest, smartest and fastest, but also the most helpful and selfless? Keep reading to explore the fascinating and somewhat controversial theory of kin selection.