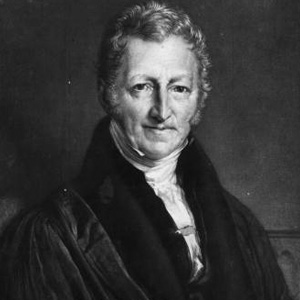 Thomas Malthus, the man who first warned us that the human population is increasing far faster than the food supply can accommodate
Hulton Archive/String/Getty Images

For many natural scientists, 1859 marks the beginning of the modern era of biology. That's the year Charles Darwin published "The Origin of Species," the book that spelled out the theory of evolution by natural selection. Darwin is such a cultural icon and so closely identified with evolution that it's easy to think that he arrived at his theories in a vacuum. In reality, the father of modern biology was influenced by Thomas Malthus, who published "An Essay on the Principle of Population" in 1798. In fact, it might be said that "The Origin of Species" owes its existence to Malthus and the controversial idea at the heart of his essay.

Before we delve into this idea, we should cover how Malthus, an English economist, came to write his essay. One of the great concerns of 18th and 19th century England was the decline of living conditions, especially in cities such as London and Manchester, where poor laborers lived in slums with inadequate housing and sanitation. As people poured into urban areas, social reformers began discussing the scientific and philosophic aspects of population growth. One such reformer was William Godwin, who wrote a popular book titled "The Enquirer." In it, Godwin described population growth as a beneficial force -- something that could produce more workers and lead to greater wealth and a higher quality of life for all. Malthus disagreed vehemently and, in response, wrote his now-famous essay.

Here's what Malthus asserted: First, he said, food is necessary for humans to survive. Second, human beings enjoy reproducing too much to stop. As we reproduce, our numbers will grow. Unfortunately, population tends to grow exponentially while food production increases only linearly. In other words, population grows at a much faster rate than the amount of food being produced. This disparity in growth rates, Malthus argued, will eventually lead to a population of people who can't be adequately fed. And this, finally, will lead to even more human suffering -- disease, famine, murder.

Find out what linked Malthus to Darwin next.

As Human Population Surges, So Does Interest in Malthus

It's 1838. Darwin is struggling to unify a growing collection of notes and observations on his still-developing theory. He picks up a copy of Malthus' essay and, after reading how human population grows unchecked, realizes that all organisms have a capacity to over reproduce. A female frog lays thousands of eggs. An oak tree drops millions of acorns in its lifetime. And yet the world isn't overrun with frogs or oak trees. For Darwin, this is a lightning bolt of inspiration. Once he realizes that organisms over reproduce and that some of these offspring are better suited to survive than others, he has the clue he needs to explain how natural selection works.

Darwin and Malthus have been linked in the history books ever since. Over the years, as Darwin's theory has been embraced and widely accepted, Malthus's premise has faced skepticism and out-and-out scorn. His detractors are quick to point out the mistakes he made. One of his biggest was failing to account for the impact of agricultural advances, such as fertilizers, irrigation and mechanization, that have kept food production ahead of population. Malthus also failed to anticipate the impacts of family planning and contraception, which have helped reduce fertility rates. For these reasons, many economists dismiss Malthus as a naive forecaster.

But recently, interest in Malthus and his thoughts on population have experienced a bit of a revival. One reason is recent data from the United Nations suggesting world population will top 9 billion by 2050 [source: Secretariat of the Convention on Biological Diversity].

Many experts believe our planet can't support such a large number of people. For example, in its 2008 "Living Planet Report," the conservation organization WWF states that the global footprint of humans already exceeds the world's capacity to regenerate by about 30 percent [source: Hails]. What will happen when the human population exceeds 9 billion? Will more and more of the world succumb to poverty, famine and disease?

Supporters of the Malthusian premise say yes, this is exactly what will happen. Those who oppose the idea believe that technological advances -- some we have yet to conceive -- will enable us to live long and prosper. For better or worse, we won't know who's right for decades.