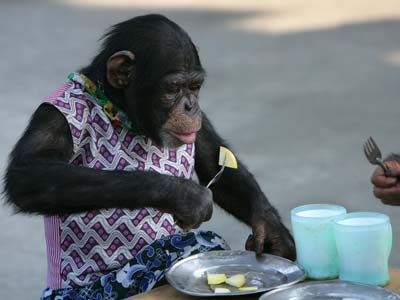 Could ancient dietary changes have set the course for human and chimp evolution?
Getty Images

Scientists believe that an explosion of just such genetic changes caused the lineage of the great apes to branch off from the lesser, tailed primates 10 million years ago. Then, 2 million years ago, a similar genetic burst splintered humans off from the rest of the apes. In comparing genetic differences between humans and other apes, scientists at Cornell University reached a theory that the split between humans and chimps might have very well come down to issues of scent and taste [source: Cornell News].

The Cornell team found hundreds of gene sequence changes in areas related to, among other things, smell and digestion. Obviously, humans are the most evolved primate species on the planet, with chimps coming in second. The hierarchy also exists when you look at meat consumption among primates. Chimps are only surpassed in meat consumption by humans. Researchers suggest that a dietary change brought on by sudden climate change may be the key catalyst behind the explosions in evolution that separated humans and chimps from our most recent common ancestor. The genes involved also affect long-bone growth, hairiness and hearing -- the last of which is closely connected to the development of speech.

Increased meat eating also may have lowered the physical playing field between males and females. Primatologists believe that a new mating system emerged 1.9 million years ago among humans, replacing the dual male-female hierarchy with more of a team effort. As males shared more meat with their females, females grew in size and were able to produce bigger children with larger brains [source: Wade].

If these findings are correct, it means that man's appetite set him on the evolutionary path to global dominance -- an insatiable hunger that continues to shape the future for all life on this planet.

Explore the following links to learn even more about the relationship between humans and other apes.