How Is Cryonics Performed? 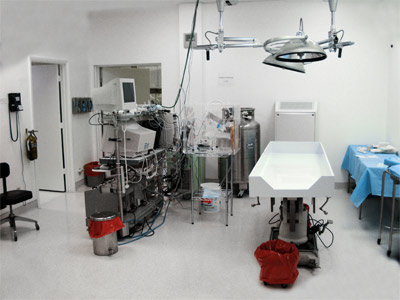 ­If ­you decide to have yourself placed in cryonic suspension, what happens to you? Well, first, you have to join a cryonics facility and pay an annual membership fee (in the area of $400 a year). Then, when your heart stops beating and you are pronounced "legally dead," an emergency response team from the facility springs into action. The team stabilizes your body, supplying your brain with enough oxygen and blood to preserve minimal function until you can be transported to the suspension facility. Your body is packed in ice and injected with heparin (an anticoagulant) to prevent your blood from clotting during the trip. A medical team awaits the arrival of your body at the cryonics facility.

Once you are transported to the cryonics facility, the actual "freezing" begins. Cryonics facilities can't simply put their patients into a vat of liquid nitrogen, because the water inside their cells would freeze. When water freezes, it expands -- this would cause the cells to simply shatter. The cryonics team must first remove the water from your cells and replace it with a glycerol-based chemical mixture called a cryoprotectant -- a sort of human antifreeze. The goal is to protect the organs and tissues from forming ice crystals at extremely low temperatures. This process, called vitrification (deep cooling without freezing), puts the cells into a state of suspended animation.

Once the water in your body is replaced with the cryoprotectant, your body is cooled on a bed of dry ice until it reaches -130 C (-202 F), completing the vitrification process. The next step is to insert your body into an individual container that is then placed into a large metal tank filled with liquid nitrogen at a temperature of around -196 degrees Celsius (-320 degrees Fahrenheit). Your body is stored head down, so if there were ever a leak in the tank, your brain would stay immersed in the freezing liquid.

Cryonics isn't cheap -- it can cost up to $150,000 to have your whole body preserved. But for the more frugal futurists, a mere $50,000 will preserve your brain for perpetuity -- an option known as neurosuspension. Hopefully for those who have been preserved this way, technology will come up with a way to clone or regenerate the rest of the body.

Following vitrification, patients are placed in individual aluminum containers.
Photo courtesy Alcor Life Extension Foundation
Each aluminum container is placed in a "neuropod" or "wholebody pod" that is then immersed in liquid nitrogen. This neuropod is being lowered into position among four wholebody pods in a storage tank.
Photo courtesy Alcor Life Extension Foundation

If you opt for cryonic suspension, expect to have some company. Several bodies and/or heads are often stored together in the same liquid-nitrogen-filled tank.