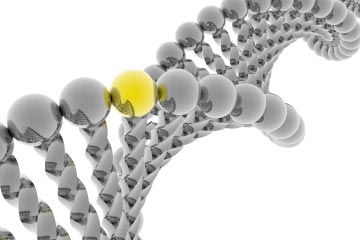 How do we flip the switch?
©iStockphoto.com/Osuleo

Unless they schedule an appointment for highlights at the salon, many people who started out blond wave goodbye to their lighter-color hair as they grow up. Do the stresses of adulthood scare our childhood hair away? Or, let's take another example of a childhood trait lost to adulthood -- the ability to digest dairy. Thanks to an enzyme called lactase, most young children can digest milk. But as children grow older, it's common to lose that ability. What's happening here?

It all comes down to a process called gene regulation. This is how our genes are turned off and on, for minor things like hair color and vital functions like protection from cancer.

Within our bodies, we house trillions of cells, all busily going about doing their jobs while we enjoy our days. Each of those cells has a nucleus that contains our DNA -- genetic material passed on to us from our parents. DNA is composed of different sequences of our genes. These sequences hold directions for making the proteins that will carry out a cell's particular function. This is how one cell might end up being important to your kidneys, while another cell makes bone.

When a gene is turned off, it no longer provides the directions for making proteins. This means that the proteins needed to fulfill a particular job -- say, tolerate lactase -- aren't produced. Think about following driving directions on a GPS device in your car. What happens when you drive underground in a tunnel? The ground above you blocks the ability for your GPS to receive directions from its satellite. In other words, the directions are masked, and you might not know which way to go.

This metaphor is also a way of looking at gene regulation. However, when it comes to genes, it isn't a layer of dirt and metal obstructing the way. It could be one (or more) of a variety of factors: stages of your development, the environment, internal influences like hormones and genetic mutations. Keeping in mind this full range of factors also helps show that gene regulation isn't always a bad thing. Just as having to figure out our own directions every once in a while can be fulfilling to the explorer in all of us, turning certain genes off and on can be a completely natural process. Regulation can help our cells behave properly and aid us in adapting to our environment [source: National Center for Biotechnology Information].

Now that you have a brief overview on genetic regulation from afar, find out what's happening inside a cell to turn genes off and on.

Three Ways Your Genes Turn On and Off

Although gene regulation is complex and we still have a lot to learn, scientists do know of three ways in which our genes are turned off and on. We'll touch upon all three here.

The first way our genes get the big red or green light is through gene transcription. During transcription, the first step in reading the gene's directions and getting proteins made, the nucleus of the cell needs to figure out how to get its knowledge transferred. It does this by copying itself and sending the copy off to share the directions. This is like you copying out driving directions ahead of time and sharing them with everyone else.

Of course, if you can't get to those directions, you can't share them, either. That is how gene regulation works during transcription. A protein, called the transcription factor, can either cover up the gene directions or reveal them, thus determining whether the gene is on or off.

Recent discoveries have unveiled another means of gene regulation. This new area of science is called epigenetics, the study of how different environmental and lifestyle factors can alter how our genes behave, without actually changing our genetic makeup [source: Science].

So how can something like exposure to an environmental hazard boss our genes around without actually changing them? The answer is through DNA methylation. During methylation, methyl groups -- a gang of one carbon and three hydrogens -- move in and plop down on our genes. The methyl group tells that gene how to behave [source: Weinhold]. Some of these behavior changes appear to be linked with diseases, so researchers are trying to develop medications that can control them. Since these developments are in their infancy, though, researchers are faced with the challenges of inadvertently turning other behaviors on or off while trying to treat just one.

While we're on the topic of medications that drive methylation, let's talk further about how humans are taking genetics into our own hands. If our genes get turned off and on throughout our development or from external influences, can we become the traffic officers instead? It appears so.

Just as with the development of epigenetic medication, researchers are working on approaches to gene therapy. From a very basic level, in the new arena of gene therapy, healthy genes are added to areas where other genes have gone missing, have a mutation or are just "off." The hope is that the healthy genes will jump-start what the silent or missing genes are supposed to be doing.

If you take our GPS example, this is like getting your directions from the driver in the car next to you since your GPS doesn't work in the tunnel. However, keeping in mind all of the complexities of how genes are regulated and how we are learning more and more every day about what individual genes do and how they interact, the challenge here is developing therapy that is effective. After all, remember how many times you've received bad directions.