Animal, Cancer and Other Genomes 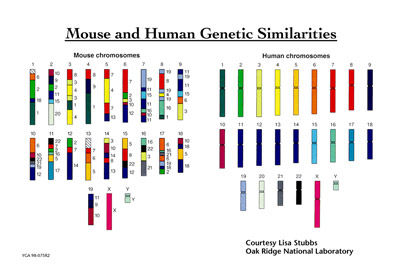 Scientists have mapped many animal genomes, among them that of the chimpanzee, mouse, rat, fruit fly, roundworm and puffer fish. They've also charted some plant and disease genomes. These genomic maps are useful in part beca­use animal genomes can be compared to human genomes. Think of a police procedural TV show where a translucent printout showing the DNA of a suspect is lined up against that of the DNA evidence. When everything lines up, there's a match, and the police have their killer. Similarly, scientists can look for matches between human and animal DNA. They don't expect perfect matches, but by examining where our genomes do line up, researchers can see what we have in common with animals, what we don't, and make determinations about common ancestors and how we've evolved. In cases of diseases afflicting animals, such as the cancer ravaging the Tasmanian devil population, a better understanding of animal DNA can potentially lead to important medical treatments.

­We mentioned that one goal of the HGP was to sequence the genomes of five "model organisms." This sequencing is an important part of a field known as comparative genomics. In comparative genomics, the study of an animal with a less complex genome, such as a mouse, may yield important information about genes that mice and humans share since we are, in fact, genetically very similar [source: HGP Information]. Just like other forms of animal testing, examining the genome of another species can tell us more about our own.

One of the most intriguing cases of an animal whose genome has been mapped is that of the platypus. This creature has always been considered an oddity because it's one of the few mammals that lays eggs and nurses its young through its abdominal skin, rather than with nipples. The platypus genome, with its 18,500 genes, is important because it harkens back to an ancient time when mammals were egg layers [source: Hood]. Evolution probably took humans away from the ancestors we share with the platypus around 170 million years ago. Today, this evolutionary marvel has characteristics of mammals, birds and reptiles [source: Hood]. They also have 10 sex chromosomes, as compared to our paltry two.

Outside of the human genome (and of course that of the platypus), perhaps no genetic mapping project is as compelling as that focused on unraveling the genetic code of various cancers. Sequencing of cancer genomes allows scientists and doctors to discover gene mutations that contribute to cancer, potentially leading to better detection methods and treatments.

The first complete cancer genome sequenced was that of acute myeloid leukemia, a severe form of cancer that begins in the bone marrow. The Cancer Genome Atlas, an organization that hopes to sequence many types of cancer, led the mapping using massively parallel sequencing, which compares normal and cancer DNA and looks for mutations [source: Kushnerov].

­If cancer-genome sequencing proves the hypothesis that each occurrence of cancer produces unique mutations in a particular person, future doctors may be able to customize treatments for each patient. With many treatments available for some conditions, it's often a process of trial and error to see what works best for one person over another [source: Aetna]. In some cases, this practice can do more harm than good or deprive doctors and patients of valuable time needed to stem a disease's advance.