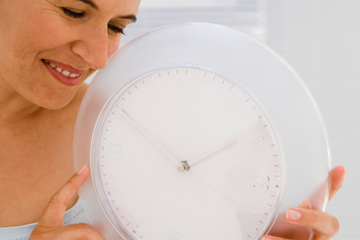 What if time was no longer an issue?
Jupiterimages/Thinkstock

"I don't want to achieve immortality through my work. I want to achieve it by not dying." So said American director Woody Allen. We've been raised with the belief that death is inevitable, so we must consider the legacy of what we'll leave behind. But what if you had unlimited time to pursue your life's work? What if you didn't have to die?

The idea of living forever might seem like one that's limited to fairy tales, particularly if you were born in 1800, when the average life expectancy was 35 years [source: Sieberg]. Now, though, men in the U.S. have a life expectancy of 75 years; women, 80 [source: O'Neill]. If life expectancy can more than double in 200 years, then might it double again? Could it do so infinitely?

Some researchers believe that there's a limit on how many years a human being could live, the maximum being 125. Others see a world in which we have centenarians walking around with people who have lived for 500 or 1,000 years. Diseases related to aging, like dementia and heart disease, currently block us from reaching that point. Our body parts wear out from use. In the quest for immortality, then, scientists are focused on how to stop aging from occurring within the body.

One method that has demonstrably increased the lifespan of creatures such as mice is a calorie-restricted diet. To follow this diet, you must cut your caloric intake by 30 percent while still consuming all necessary nutrients. This eating plan has proven difficult for humans to maintain, so researchers are trying to figure out how, exactly, fewer calories lengthen life. If they can solve that puzzle, they may be able to replicate the mechanism in pill form.

Anti-aging pills could also be used to halt the production of free radicals, which are molecules that cause increasing damage within the body as we age. Researchers are also considering whether compounds like resveratrol, which is found in red wine, could be effective in pill form, as resveratrol might have the ability to interfere with the aging process at the genetic level. Some scientists think that telomerase, an enzyme that mends protective coverings on cells, is the answer, while some would-be centenarians have begun injections of human growth hormone, hoping they will stop the body from aging.

As you might be able to tell, there are many theories on why we age and how we can stop it, and an anti-aging pill may be decades away -- if it ever appears at all. One challenge to the pursuit of an anti-aging pill is how long humans already live; while current studies with mice or yeast cells are feasible, a study on a human could take, well, 75 or 80 years.

Some people aren't going to wait that long. Take Ray Kurzweil: He claims that by 2045, an event known as "the singularity" will occur, and humans will become one with machines [source: Kushner]. Flesh and blood aren't ideal materials for longevity, so we'll turn to materials that are a bit more durable. Other futurists envision a world in which a computer serves as backup for our brain and silicone parts will take the place of frail limbs.

As scientists figure out whether we'll be part machine or hopped up on resveratrol, it's probably best not to abandon your life's legacy just yet.