What are the likely outcomes of mankind's new knowledge of the human genome? 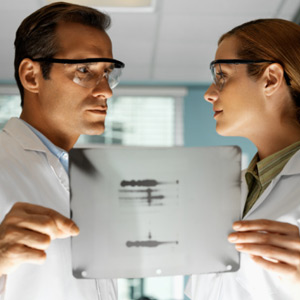 How far have we come with the human genome?
George Doyle/Stockbyte/Thinkstock

Within every human cell lies a genetic recipe -- groups of tightly coiled chromosomes containing DNA, the hereditable, genetic information that makes us human. Extracting, cloning and sequencing DNA's nucleic acid base pairs (A,T,C,G) seems tedious and inconceivable, considering the human genome contains roughly 3 billion pairs [source: NHG Research Institute]. But after scientists announced the first draft of the human genome in 2000 and its completion in 2003, people began to wonder how this internal voyeurism would change life.

Several research institutes stated the accomplishment would revolutionize science and modern medicine -- but how, exactly?

Today, the same question remains, but not absent from scientific progress. The Human Genome Project (HGP) catalyzed an explosion of genetic and biological research in both public and private sectors. Despite the project's success, researchers realized interpreting the genome would be a project in itself. It would be similar to owning a manual to build something: All the pages of a manual to build the human body are in our hands, but we don't understand the content of the pages yet [source: NHG Research Institute].

Though the HGP achieved its proposed goals, some think discussion about the genome's potentials in the future was too ambitious. In one 2010 survey, 47 percent of participants that worked in research-related fields agreed the potential impact of the human genome was hyped (compared to 40 percent who agreed promises made were realistic) [source: Nature News].

The human genome's most appealing idea stemmed from the concept of hyper-personalized medicine, in which drugs, vaccines, diagnostic screenings and treatments could be tailored to a specific person based on his or her genetics. Even though personalized medicine is a possibility in the future, the idea runs rampant today despite the scarcity of technology ready for use. More than one-third of researchers surveyed agree personalized medicine won't take root for another 10 to 20 years down the road [source: Nature News].

This isn't to say the beginnings of personalized medicine haven't arrived -- some biotechnology companies already offer individual DNA reports that provide people with information about disease risks and possible drug interactions based on a DNA sample [source: Pathway Genomics]. We can expect to see more personalized developments in the medical field in the near future.

The most likely outcomes from our knowledge of the human genome will continue to orbit around sequencing techniques and basic biological discoveries. Research methods used in sequencing the human genome have allowed scientists in other fields to adopt similar techniques. For instance, anthropologists studying ancient human populations now have the resources to compare remnants of DNA found in fossils to that of modern humans. The human genome has also contributed to sequencing and even modifying the genomes of plants and animals humans rely on for food. Gene therapy research and better drug screening methods have benefited and will continue to show promise thanks to the human genome, too.

But most importantly, the genome's biggest impact on science can be seen in attitude shifts surrounding what scientists deem as important. Now presented with a more detailed picture of the human genome, researchers are shifting their focus from the roles of genes to the importance of other proteins and even non-coding genes. This outcome will continue to grant researchers insights into basic biology to help create better medical treatments and diagnostic tools in the short-term and in the future.

To read more about the human genome's history and future, see the next page.