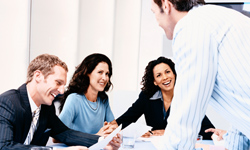 Though you may think you sounded like a fool, you probably did just fine. People rely on laughter to get along with others, so whether we're with our boss or friends, we tend to laugh at things that just aren't funny.

In a study of laughter episodes, Provine found that people tend to laugh at perfectly bland statements like "Can I join you?" or "See you later" [source: Provine]. Laughter could have developed in our ancestors before full speech, so the sound is merely a way to communicate and show agreement.

And if you're trying to ascend the corporate ladder, you're not the only one laughing at the boss. We tend to laugh with anyone who can help us out, which is why a group of undergraduate students may guffaw at a professor's bad joke, while a job applicant's attempts at humor may fall flat with those who are already gainfully employed.