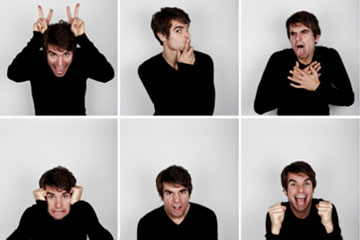 The many faces of funny.
Brand New Images/Getty Images

Considering how long people have pondered why humor exists -- and the resulting library of tomes on the topic -- it seems astonishing that the first-ever academic symposium on comedy took place in January 2011. If organized in ancient Greece, the event could've featured Plato and Aristotle as keynote speakers, since both waxed philosophical back then about what compels us to crack jokes. But one thing Aristotle definitely got wrong about humans and humor is that we aren't "the only creatures that laugh," as he suspected [source: Provine].

While chimpanzees, gorillas and orangutans don't have the ability to vocalize "knock, knock" knee slappers, they do chuckle, particularly if tickling behavior is involved. And it doesn't always require actual physical contact to elicit such a response, either. Baby chimps will also cackle if parents pretend to tickle them, wiggling a finger near -- but not on -- their flesh [source: Tierney]. Why do primates have such sensitive funny bones? Some think, from an evolutionary standpoint, primates started laughing to signal that a perceived threat wasn't as dangerous as it seemed, while others link the laugh to teaching younger generations how to play and get along with each other [source: Warner].

And certainly, humor serves as societal glue among people too, binding together groups through inside jokes and culturally relative references. It's simultaneously an ice-breaker and a rule-maker, fostering attraction as well as it establishes hierarchy. Humor's manifold applications make sense since it's as fundamental to human populations as sex. In short, everybody does it. The phonetic forms of laughter ('ha ha,' 'hehe') are strikingly similar across languages as well, which means it sounds the same whether you're at a comedy club in New York City or a Bedouin tent in the desert [source: Beard].

But after a couple millennia of endless theorizing, experimenting and general goofing off, we have yet to decipher any universal formula for comedy. We can outline the basic elements of stand-up routines, itemize the number of whipped cream pies in a slapstick skit, and identify the differences between irony and sarcasm, yet it's nearly impossible to predict what will elicit a genuine laugh from every single audience member. Indeed, dissecting the why and how of humor is a far more delicate operation than delivering a deadpan one-liner, but that hasn't stopped a number of philosophers and scientists from trying. To begin to understand the prevailing theories in funny science, let's return to that comedic duo of yore: Plato and Aristotle.