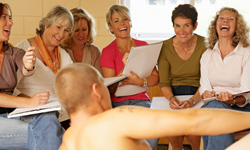 There are times when we need to project dignity and control, like during presentations to the CEO or during a funeral. Unfortunately, these are the times when uncontrollable nervous laughter is likely to strike.

During times of anxiety, we often laugh in a subconscious attempt to reduce stress and calm down. However, nervous laughter usually just heightens the awkwardness of the situation.

Nervous laughter is often considered fake laughter, to the point that a 1909 article in the New York Times advised women to stop this kind of laughter immediately. The article, which recommended spanking young girls who were developing such a bad habit, told women that once they broke themselves of nervous laughter, they would wonder how people even stood their company before [source: New York Times].

My, how times have changed.