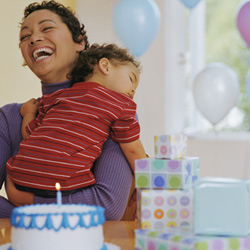 Those of us who work in cubicles may think that silent laughter is a skill we've perfected so that we can look at funny Web sites and videos at work. Mindfully practicing silent laughter, though, can have real benefits because it involves the same type of deep breathing that comes with belly laughter.

One woman who works as a clown in a children's hospital explained to Canadian Living that teaching sick kids the art of silent laughter enabled them to go back to sleep after waking up from a bad dream [source: Van Dyk]. The children got the calming benefits of the rhythmic exhalations without waking up any roommates.

This type of laughter is also practiced in laughter yoga and laughter therapy, where it's often called joker's laughter. To try it on your own, freeze your face into a smile like the Joker of Batman fame, then let your belly do the work of pushing air in and out as if you were laughing out loud.