The Chemistry of Chocolate 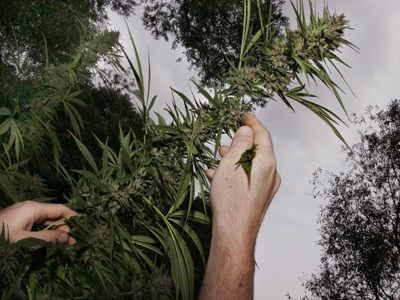 There's actually more than one compound found in chocolate that could potentially make a person high. For starters, the most widely used psychoactive drug in the world is found in chocolate [source: Fackelmann]. The compound 1,3,7-trimethylxanthine -- better known as caffeine -- occurs naturally. It produces a stimulating physiological effect by exciting the central nervous system, which, in turn, increases heart rate and contracts muscles. It's a lot like the fight-or-flight response. Caffeine acts on dopamine and adenosine receptors in the brain, which then release their respective pleasure-producing chemicals.

A compound that's closely related to the active ingredient in marijuana (tetrahydrocannabinol-9) is also found in chocolate. Fatty acids called cannabinoids hit the CB1 and CB2 receptors found most predominantly in the frontal cortex and the parts of the brain responsible for motor function and memory. When cannabinoids hit these receptors, a person starts to feel intoxicated and relaxed as a result [source: Medscape].

As if that one-two punch of psychoactive stimulant and depressant weren't enough, chocolate also packs another surprise in its glove for people who eat it. Phenylethylamine is often called the "love drug," since it releases the same chemicals that are introduced into the human body when love comes to call [source: Millward]. The compound produces a similar effect to the one produced by amphetamines, and is classified as a hallucinogen. It also is aces ate releasing the pleasure-producing chemicals dopamine and serotonin. The combination produces an exciting high, much like the one generated by the designer drug ecstasy [source: Hanson, et al].

With all of these wonderful chemical compounds triggering a flood of endorphins and other pleasure-inducing hormones, one can't help but wonder why people aren't in the streets bumming change to get a chocolate fix. Which still raises the question: Can chocolate actually get you high?