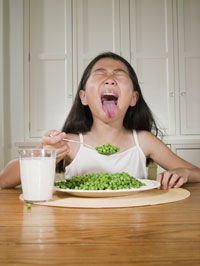 Many of us claim to hate vegetables when we're younger. See more pictures of emotions.
D. Anschutz/Digital Vision/Getty Images

We often use the term "hate" loosely. From our early years we proclaim to hate vegetables. Later on in life, teenagers profess undying hatred of the parents who refuse to extend curfew by a half hour. In actuality, these scenarios more accurately describe a strong aversion or dislike of the situation or legume at hand. But true hatred has appeared all too often throughout history. Religious and political wars have claimed the lives of millions and innocent people have been killed for no greater reason than they were different in socially unacceptable ways.

The common denominator in most acts of hatred is fear, usually fear of different types of people or ideas. This is why hatred is most often directed toward people of differing race, sexual orientation, religious background or some other criterion. People are threatened by the unknown and seek to extinguish this fear, resulting historically in massive death tolls, slavery and other injustices.

Merriam-Webster defines xenophobia as "fear and hatred of strangers or foreigners or of anything that is strange and foreign." Some psychologists assert that hatred isn't inherent at birth. Instead, they believe this emotion is learned over time, sometimes rearing its ugly head later in life in the form of bigotry, prejudice and even hate crimes.

While hatred may not be instinctual, distrust might just be. Long before the existence of codified law, uncivilized people lived defensively and territorially. These people didn't take kindly to unfamiliar people on their turf. Rather than approaching with a handshake and a smile, they usually responded to possible threats with violence. Since the people who took the "kill rather than be killed" approach survived and reproduced, this attitude evolved over time into the instant classification of strangers. As such, the idea of "us vs. them" became instinctual and socially acceptable.

In this article you will learn more about the various types of hatred-inspired beliefs that persist in today’s society. In addition, this article will detail the difference between hate crimes and regular crimes, as well as why they happen and how they have snowballed out of control in the past. 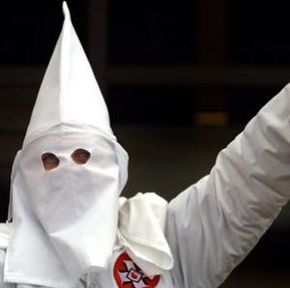 A Klansman at a white power rally in Skokie, Ill., in 2000
Tim Boyle/Newsmakers/Getty Images

Much like love, hatred is often blind, making human beings prone to believe things that simply are not true. Sadly, too many of us fall victim to this reality, resulting in feelings of animosity and prejudice with little or nothing to back it up. This blind hatred often has to do with race, religion, gender, politics or sexual orientation. As such, it has wreaked havoc on the world for centuries and will probably continue to do so for many more. Below are some examples of the different ways hatred manifests itself:

Racism: Racism is characterized by racial prejudice or discrimination. To narrow it down a bit, prejudice is defined by Merriam-Webster as "an irrational attitude of hostility directed toward an individual, a group, a race or their supposed characteristics." This hostility has been known over the years to lead to some pretty heinous errors in human judgment, including the slave trade, racial profiling and countless hate crimes. Interestingly enough, it does not appear that humans are hardwired to hate based on skin color.

Hatred is believed to be a learned emotion, and recent studies have shown that racism is also learned, rather than innate. When ancient people adopted the "us vs. them" theory, they were being territorial, rather than racist because they probably never saw people who looked different from them. Many psychologists believe that, although people do classify others based on race, they are more likely to mentally classify them based on age and gender. According to author Michael Shermer, who wrote The Science of Good and Evil, if all humans had the same skin color we would find a new way to divide groups up and perpetuate the "one of us" or "one of them" habit.

Religious and politically-based hatred: If you need further proof that humans don't require differing skin colors to find fault with each other, simply look to the many religious and political wars that have occurred throughout history. Protestants and Catholics, members of two religions that promote peace and love, have fought bloody wars. We know that two branches of the Maori tribe in New Zealand completely exterminated or forced into slavery the similarly named Moriori tribe because they wanted the Moriori's land. Terrorist attacks are almost always related to political arguments, religious disagreements or both. Religious and politically motivated atrocities have traditionally been inspired by greed, envy and fear.

Hatred based on sexual orientation: The decision to come out of the closet is usually a very difficult one that is not made easier by rampant homophobia that persists in today's society. According to the American Psychological Association homosexuality and bisexuality are often subject to social stigmas such as prejudice, violence and discrimination.

It's important to remember that hatred can be a strong word in some circumstances as it relates to these issues. For example, it is possible to be disapproving or intolerant of others of a different race or orientation without proclaiming to hate them.

Despite major advances in psychological counseling and treatment, self-hatred remains a problem for many people around the world. Attempted and successful suicide is all too often the result of these feelings of self-loathing and despair, which can be caused by mental illness, as well as social and environmental factors like sexual or substance abuse. Teens are especially at risk of suicide. According to the American Psychological Association (APA), suicide is the third most common cause of death for people between the ages of 15 and 24 years old. 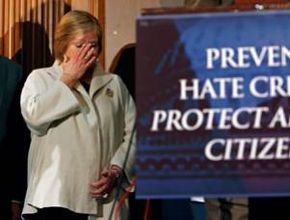 Judy Shepard tears up at the announcement that the Local Law Enforcement Hate Crimes Prevention Act would be named for her son Matthew, the late victim of an anti-gay hate crime.
Chip Somodevilla /Getty Images

Defined by the American Psychological Association (APA) as "violent acts against people, property or organizations because of the group to which they belong or identify with, hate crimes (also known as bias crimes) are all too common today, despite a crackdown in recent years by the Federal Bureau of Investigation (FBI) and other law enforcement agencies. In fact, the FBI reported that 2006 saw an 8 percent increase in hate crimes nationwide from 2005. Nearly 8,000 hate crimes were committed in 2006 and ranked in this order in terms of numbers: anti-black (2,640), anti-Jewish (967), anti-white (890), anti-male homosexual (747), anti-Hispanic (576), anti-Islamic (156) and anti-female homosexual (163).

People who commit hate crimes are not believed to be very different than most people. A study conducted at the University of California, Los Angeles profiled 550 hate crime criminals to determine which factors may contribute to the perpetration of hate crimes. The researchers found that the criminals tend to be more aggressive and inclined to exhibit antisocial behavior, but for the most part aren't mentally unstable. Jack Glaser, Ph.D., with the University of California, Berkeley, says "hate crime perpetrators are not typically psychopaths. They are mostly 'normal,' but excessively prejudiced. If they are also relatively prone to violence or destructiveness this can lead to hate crime." The UCLA study also showed that many of the perpetrators studied had a strong family history of violence and abuse. Typically, hate crimes are more likely to be planned and intentional than spontaneous.

According to APA, hate crimes are considered message crimes, in that they're intended to send a clear message to the intended group that they are not liked and are not welcome. Recent efforts to strengthen anti-hate crime legislation have been stopped short with insufficient votes to ensure passage of the bill. Current federal law, enacted in 1968, allows for the prosecution of a hate crime only if it meets two criteria:

Under this law, hate crimes based on gender, disability or sexual orientation are not recognized [source: Civilrights.org].

Hatred, via the avenue of hate crimes, has a tremendous effect on society. According to Dr. Glaser, "It can certainly play a role in causing people to commit hate crimes, and marginalize communities who are common targets of hate crime." These acts of violence and disdain polarize groups and create negative emotions, furthering feelings of hate all around. Historical cases of hate crimes include the following:

Despite the lessons of the past, numerous hate organizations are still in existence today, including the Ku Klux Klan, the White Aryan Resistance and the National Association for the Advancement of White People, led by David Duke.

Did you know that hatred may be bad for you? Learn more on the next page.

Special thanks go to Jack Glaser, Ph.D., an assistant professor at the Goldman School of Public Policy, University of California, Berkeley, for his help with this article. 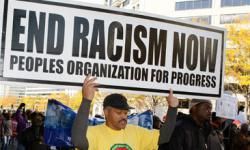 Dr. Glaser notes that hatred was probably a good thing back in the days of primitive people, when it provided the necessary motivation to attack or avoid potential enemies. But hatred can actually be physically toxic. A recent study published in the journal Annals of Behavior Medicine found that a "love-hate" relationship with a friend could actually cause a person's blood pressure to rise, at least in the short term. The study deduced that just being in the same room as a friend who tends to be critical, unreliable or unpredictable can send blood pressure up. Furthermore, many experts believe hatred causes a host of other physical problems, including reduced immunity to illness, migraine headaches and increased vulnerability to diseases like diabetes and cancer.

While it's doubtful that anyone will ever be completely able to rid themselves of hateful thoughts and feelings, it is possible to minimize its presence in everyday life. One Buddhist quote, when translated to English, reads:

Many religions espouse similar sentiments, citing that the best way to combat hatred is through forgiveness and love. Psychologists from Coping.org encourage people experiencing feelings of hate to identify the cause or causes of these feelings and how hatred is negatively impacting their lives. To overcome these feelings, the site urges people to determine whether or not real or imagined circumstances caused the hateful feelings and figure out whether their thought process was rational or irrational at the time these feelings were developed. Learning to "forgive and forget" is vital to overcoming hatred, as is the ability to admit that these negative emotions take serious emotional and physical tolls.

Unfortunately, until all human beings can learn to practice tolerance and understanding, it is doubtful that hatred will ever be fully eradicated from the world.

In recent years, the word "hater" has become an increasingly common piece of slang, particularly in the hip-hop community, although it has become more mainstream lately. According to UrbanDictionary.com, the term is defined as "A person that simply cannot be happy for another person's success. So rather than be happy they make a point of exposing a flaw in that person." The word is believed to have originated from the popular phrase, "Don't hate the player, hate the game." This, in turn, evolved into the phrase "player hater," and has been used in many hip-hop, R&B and pop songs in recent years.