Can getting angry be good for you? 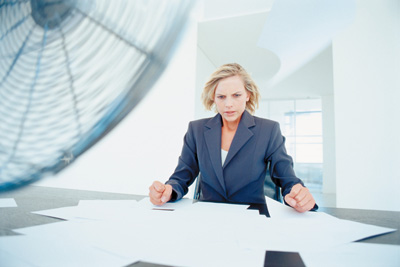 When you feel angry, try to think how you positively address the situation.
Image Source/Getty Images

One reason that people generally regard anger as a negative emotion is that you get yourself worked up over something, but it's something that's out of your control and will never change, no matter how many well-mannered conversations you have. Some theorists think that we appraise our anger for its usefulness [source: Weber]. But it may be worth thinking outside the box about how to make your anger useful.

For example, it may make you angry when cars fly through a nearby intersection without stopping. You want them to be more aware of the children that walk and ride their bikes there. You could honk or flag down the offending cars to give them a piece of your mind, but sitting at the offending crosswalk, stewing over fast cars and waving your arms is not the most effective way to deal with your anger. What might be effective, though, is working with the local police department to acquire better signage or a traffic light at the dangerous spot. This is an example of how getting angry can create positive change in society; larger examples of this include the civil rights movement and the women's suffrage movement.

Creating change in this way can give you a way to take back control, something that would be lacking if you just felt fearful about sending your children outside to play near the speeding cars. The bodily response to anger is similar to that of fear. You start releasing chemicals to prime the body for action, what we know as the fight-or-flight response. Anger definitely trumps fear in dealing with the situation.

In 2005, a study showed that responding to a stressful situation with anger instead of fear gave you a greater sense of control and optimism about the situation [source: Lloyd]. In the study, researchers analyzed facial expressions, coding them for fear and anger. Those who showed more fear had higher blood pressure and stress hormones. Another study by the same psychologist found that those who responded to the attacks of Sept. 11, with anger instead of fear were more optimistic and realistic about the risks of another attack in the following year [source: DeAngelis].

But maybe you think these people aren't thinking clearly, that their rage is clouding their brain. Anger does change your thinking, but recent research indicates that it might change it for the better. A 2007 study demonstrated that angrier people were better able to differentiate between strong and weak arguments [source: Wenner]. Those who weren't angry were equally convinced by both arguments. This study seems to suggest that anger can help you focus on what's important to you and make decisions that will meet your needs.

As we mentioned, you can't just walk around angry all the time and expect good things to happen. There has to be a level of moderation associated with this anger on either end -- in the things that make you mad and in the way that you deal with it. As Aristotle said, you have to be angry at the right thing, for the right amount of time and deal with it in the right way.

So the next time you feel yourself getting angry, ask yourself what you can do to correct the wrongdoing and stand up for yourself. You may just learn something about yourself in the process -- more than half of a group of Russians and Americans who participated in a 1997 study about their anger reported that anger created positive change, with a third of them saying that it specifically helped them address personal faults [source: DeAngelis].

To learn more about anger and other emotions, see the links below.