Are married people happier than singles? 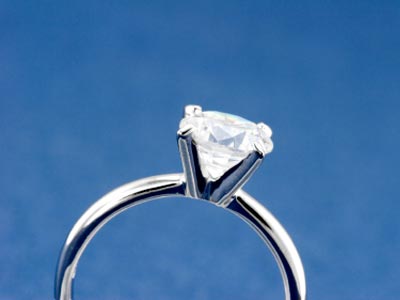 Despite the happiness payoff, Americans are delaying marriage.
©iStockphoto.com/ProArtWork

Diehard romantics say you can't put a price on love, but a pair of European economists disagrees. In 2002, the two men calculated the monetary worth of marriage at $100,000 per year [source: Financial Times].

Despite the potential payoff, people in the United States are putting off marriage later in life than ever before. In correlation with the rising life expectancy, men and women are giving themselves more time before exchanging vows. The average age for an American woman to get hitched rose from 20.8 to 25.3 from 1970 to 2003 [source: U.S. Census Bureau]. Additionally, more adults are living the single life, thanks in large part to the higher divorce rate. According to U.S. Census data, 90 percent more single-person households existed in 2005 than in 1970 [source: Beckwith].

Over the past 30 years, marriage has become more of a social choice than a necessity, but all it takes is a few episodes of "Sex and the City" to see that Western culture still favors cohabitation. Humans' animal instincts are wired for mating in one way or another. Moreover, a pervasive idea exists that discovering a soul mate brings joy and makes life worth living. Perhaps we aren't far off the mark; studies have shown that married people tend to earn more money and live longer than singles. Marriage also appears to promote better health. The Centers for Disease Control and Prevention (CDC) found that husbands and wives are less likely to smoke or drink heavily, experience frequent headaches and suffer from psychological problems than people who aren't married [source: Stein, Song and Coady].

But betting on marriage to bring you happiness may be a risky gamble. After all, the odds of holding on to that perfect partner forever have been whittled down to a coin flip -- about 48 percent of marriages end in divorce [source: Centers for Disease Control and Prevention]. Nevertheless, psychologists have pointed to marriage as the single most reliable happiness indicator. Across nations and ethnic groups, people report greater happiness from marriage than career, community or money [source: Seligman]. A 2005 survey from the Pew Research Center substantiates these assertions. Forty-three percent of married respondents reported that they were "very happy," compared to 24 percent of unmarried individuals [source: Pew Research Center]. Those results were consistent for all age groups and genders.

As any good scientist knows, correlation does not always equal causation. To close the case on whether marital bliss trumps the single life, we must deduce which comes first: happiness or marriage?

When the Honeymoon Ends 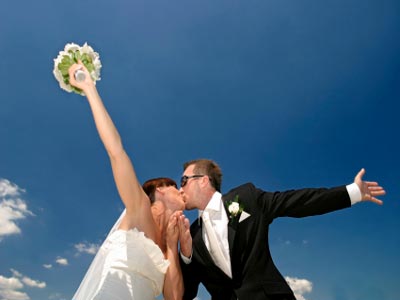 Does marriage make people happier, or do happier people get married?
©iStockphoto.com/magmarcz

A study of 24,000 German couples demonstrated the existence of the honeymoon phase that newlyweds experience. Tracking the couples' happiness levels over 15 years, a psychology professor from Michigan State University found that spouses exhibited an uptick in happiness soon after marriage [source: Stein, Song and Coady]. Then, those happiness levels gradually returned to their premarital state.

This pattern is comparable to the effects of sudden financial improvement on people's happiness. For people living with relatively low incomes, money can buy happiness for a while. Yet the longer someone gets used to having more cash on hand, the more it loses its luster.

This doesn't negate the survey results that show higher happiness rates among married people. Rather, it has led some psychologists to conjecture that married people are merely more inclined toward happiness since they're happier to begin with. Humans are predisposed to certain happiness ranges depending on their genetics, personality and life circumstances. Also, happier people are generally more social, and it follows that people who actively socialize will be more likely to meet someone they'd like to marry.

As with other major life events, people are inclined to return to their innate happiness baselines as time goes on. The study of German couples found that this holds true even with the death of a spouse. Yet the same psychologist who conducted the initial research concluded that bouncing back to that baseline may be harder following divorce. The participants who went through divorce had a slightly lower level of life satisfaction [source: Grohl].

Expectations for marital bliss can also play an important role in determining happiness. A study from the University of Florida highlighted a relationship between the skills that people bring to a marriage and people's anticipation for how much marriage will improve their lives. If partners have overly high expectations for marriage transforming their lives into in a joyous wonderland, they need to have the relationship skills to match [source: McNulty and Karney]. Otherwise, it's like going to a spelling bee expecting first place without ever cracking a dictionary.

As we've learned from happiness surveys, wedding bells can portend happy futures. But happily ever after requires more than an "I do." Marriage won't magically create happiness, which makes personal character development during the single years even more important.

How Nostalgia Works
Quick, Are You Charismatic?
What Makes Clowns So Creepy?