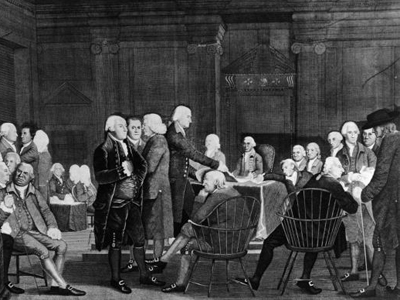 Put simply, there are no two documents more important to American jurisprudence than the U.S. Constitution and the Declaration Independence. The latter expresses several American ideals -- freedom from unreasonable government, the right to be left to chart one's own course, an equal chance to make as fulfilling a life as anyone else and many others. The former establishes the framework by which these ideals will be protected, nurtured and regulated. Put together, they are a masterwork of statesmanship that would provide the legal foundation for the nascent United States.

Much has changed since the Second Continental Congress convened in Philadelphia in the spring of 1775. Yet, the Declaration Independence, written during that session, remains the de facto expression of the American ideal -- freedom from tyranny, freedom to live life as one chooses, freedom simply to be happy.

Happiness is mentioned specifically in the Declaration, an addition that becomes somewhat unusual upon further scrutiny. Why? After all, British troops were encroaching upon the lives of American colonists and militias were being assembled to prepare for war. Despite this civic unrest, the concept of happiness figured prominently enough in the mind of author Thomas Jefferson that he chose to include it in the first paragraph of the document. What's more, his fellow members in the congress -- who heavily edited Jefferson's draft -- chose to include it in the final version.

In the document, the natural rights granted by the "Creator" for an individual's "Life, Liberty and the pursuit of Happiness" are described by Jefferson as "self-evident" [source: Cornell]. Exactly where Thomas Jefferson got the words is far from self-evident, however.