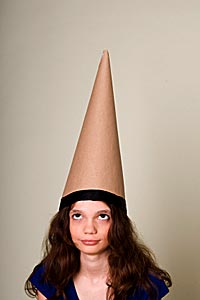 As the old saying goes, ignorance is bliss.

Think, for instance, about the victims of Bernie Madoff's infamous Ponzi scheme. You can bet your bankroll that those people were a far sight happier before they received the news that their mountains of money had vanished without a trace. In truth, those folks were never as handsomely rich as they believed, but the perception of wealth probably added a comfortable cushion against life's little annoyances. Certainly, in the realm of personal finances, the truth can sting. A study published in the Journal of Consumer Affairs found that people tend to overestimate, rather than underestimate, their creditworthiness [source: Trejos]. Those who do miscalculate their financial health end up suffering more due to poor money management.

But in both of those scenarios, the problem wasn't so much stupidity as it was a lack of awareness. What you don't know can't hurt you -- that is, until you find out about it. So how about a genuine lack of intelligence? Do smarts come with the added baggage of bad moods? If you know more, are you less able to see the bright side of life?

A 2005 study of intelligence and emotional health conducted at the University of Edinburgh found no correlation between brains and happiness [source: Edelson]. According to the results, greater intelligence acts as a double-edged sword when it comes to happiness. On the one hand, smarter people are better equipped to provide for themselves; on the other, those same people may strive continually to achieve more and be less satisfied with the status quo. At low-income levels, the issue of resource acquisition may make a greater impact on personal happiness, but the effects aren't long-lasting. Just like the fading bliss of new romance, at some point, the happiness honeymoon ends.

Rather than intelligence, the most salient factor contributing to self-reported happiness in the University of Edinburgh study was quality of life. A bed-ridden genius probably won't have the same amount of life satisfaction as someone of average intelligence who can still get around. Yet, since quality of life is comprised of many external dynamics, such as geography, education and socioeconomic background, that leaves an important question lingering. If happiness is an internal emotion, what type of internal, innate qualities contribute to it?

Do pets make you happy?