Origins of the "Pursuit of Happiness" 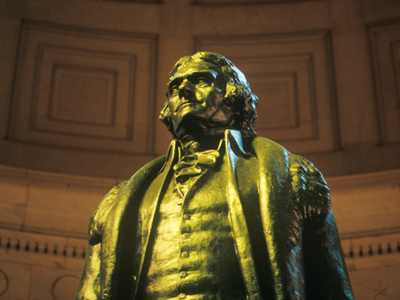 When Thomas Jefferson was asked to write the Declaration of Independence in late June 1776, he did so in just a few days. The document we know isn't terribly long, but the draft he delivered to the Second Continental Congress was much longer, and the original draft was heavily edited, revised and diluted by committee. One phrase that was in both the original and final versions is, "Life, Liberty and the pursuit of Happiness."

Why did this phrase appear in both versions? Jefferson was a well-read person; his home Monticello was filled with the works of contemporary and historic philosophers. In fact, one of Jefferson's favorite thinkers was English philosopher John Locke. Locke originally posited (in "Two Treatises on Government") the idea that a person's right to live a healthy life, free to amass and maintain property -- "life, health, liberty and property" -- is one granted by God. Locke also reasoned that our fates are determined by God; no other individual may interfere with that fate [source: Stanford].

You'll notice that Locke doesn't mention happiness. Instead, he cites property as a natural right. Clearly, Jefferson took Locke's concept of the right to life and liberty and applied it to the fledgling United States and its citizens in the Declaration of Independence. But where did the "happiness" part come from? No one's certain; Jefferson never said. As such, the addition is often attributed to him directly. He was not, however, the first person to use the phrase.

Interestingly, the phrase "pursuit of happiness" was also used by a contemporary of Jefferson's, a British political observer named Dr. Samuel Johnson. Johnson was a Tory, which meant that his sympathies in the struggle between Great Britain and the American colonies lay with the crown. Ironically, he used "pursuit of happiness" in "The False Alarm," a 1770 essay decrying the growing unrest in the colonies that would later give rise to the Continental Congress that produced the Declaration.

It's more likely that Jefferson took the phrase from Locke, argues literary scholar Carol Hamilton, since Jefferson would likely have disdained Johnson's Tory leanings. In 1690, Locke wrote, "The necessity of pursuing happiness is the foundation of liberty" [source: Hamilton]. In the essay, Locke also uses the exact phrase "pursuit of happiness."

Whether it was Locke, Johnson or Jefferson who originally put the idea to paper, precisely what happiness means and how it's pursued in America has long been subject to interpretation.