Why do we remember pain? 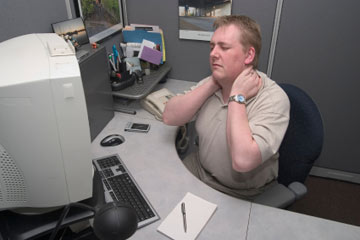 We form memories of pain in order to not repeat a dangerous behavior. However, chronic pain may be the persistence of pain memories in the nervous system.
©iStockphoto.com/MotoEd

In 1954, two researchers at Canada's McGill University accidentally discovered how humans learn to repeat behavior that's beneficial to our survival. An electrode implanted in the brain of a rat had slipped from its intended place and had come to rest on the medial forebrain bundle, a group of nerve cells that leads from deep in the brain to the prefrontal cortex. Upon delivering a series of electrical shocks to the electrode, the rat displayed a keen interest in the area of its box it had been exploring when it received the first jolt.

At first, the researchers, James Olds and Peter Milner, believed they found the region of the brain responsible for governing curiosity [source: Linden]. Upon further investigation, Olds and Milner realized that what they'd discovered was the brain's reward center, a system of regions associated with delivering a sense of pleasure in return for certain behaviors like eating and mating. This discovery was revolutionary; it showed that animals, including humans, are equipped to learn through motivation.

But motivation goes both ways. Animals may also be motivated not to repeat a behavior, and one of the great teachers of this lesson is pain.

Early investigation into the nature of pain found it a fairly simple concept. Nociceptors, specialized pain nerve receptors, sense damage or potential damage to tissue through stimuli such as laceration, increased or decreased temperature, crushing, or other modes of injury. This sensation is translated into an electrical impulse, and then travels to the brain where it's experienced as pain. We form memories of these sensations; we learn not to touch a hot stove, to be careful when using a carving knife, to bundle up in the cold. We remember pain in order to learn to avoid detrimental behaviors.

Yet, pain isn't so simple. The experience of pain isn't merely physical; it's also attended by emotional and psychological pain. In tandem, they're known as suffering. The memory of pain may also outlast its benefits as acute pain becomes chronic pain.

Further research has found that the pathways used by pain impulses excite not only the areas of the brain that experience physical sensation, but also those associated with emotion and cognition [source: Chapman]. Pain is not only a physical experience; the association of cognition -- higher awareness -- and emotion attach meaning to the experience of pain. These additional features of pain appear to help humans create more refined memories of a painful experience, which may help keep the person from repeating it in the future [source: Ackerman].

However, the cognitive mind isn't alone in forming memories of pain. Research into the nervous system has found that it can also form memories of pain, which can persist even after tissue removal. The so-called phantom limb phenomenon illustrates how the mind may retain its ability to experience pain, even after the nociceptors are no longer present. Studies show that patients who have undergone amputation tend to experience the phantom limb sensation far more frequently than people missing a limb congenitally [source: Melzack, et al]. Indeed, recent studies have found that the persistence of pain memory can lead to a restructuring of nervous system function. This change can lead to chronic pain, the sensation of pain in a healthy person.

The persistence of the memory of pain that can last beyond its beneficial function has led to research into ways of alleviating chronic pain. Research has shown that the best way to thwart chronic pain is to prevent pain memories from forming in the first place. Anesthesia prevents the conscious mind from forming pain memories during a purposeful injury like surgery. Yet, the nervous system can still form its own pain memories. Medical professionals are finding that analgesics -- drugs that prevent pain in the nervous system -- given to patients before surgery prevent chronic formation of pain memory, which diminishes the development of chronic pain later on [source: Ackerman].

What is the definition of insanity?
How Polyphasic Sleep Works
Can You Be Addicted to Endorphins?