Why It Feels So Good To Be Scared

Browse the article Why It Feels So Good To Be Scared 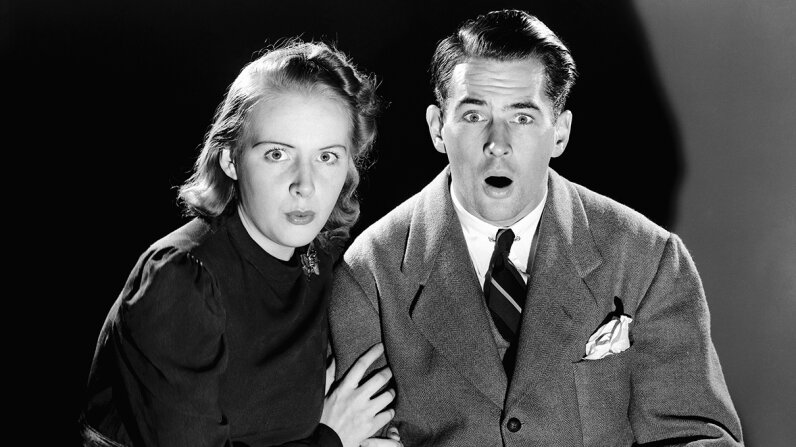 Why so many people love to be scared is a complex question with a complex answer. Bettman/Getty Images

Mass shootings. An uncertain political and economic future. Nuclear war. Spiders! On the menu of "what's scary these days," there are many threats to choose from. So it begs the question: Why would anyone want more? Why do people, in fact, pay money to be scared when there's already enough frightening stuff served up daily?

But that's exactly what tons of people do. They seek out horror movies, scary books and haunted houses. They pay to consume fear. And selling fear is an increasingly profitable pursuit.

But this is nothing new. Since 1960, horror movies have taken more than $13 billion of our hard-earned dollars ($24 billion when adjusted for inflation in 2017), according to the website The Numbers, which tracks movie receipts. It's big business.

And the haunted-house industry — yes, we can call it an industry now — is also capitalizing. It grossed more than $300 million in 2013. Amusement parks, another place to find heart-racing attractions that scare so many, annually serve 375 million people in North America alone.

Of course, this brand of fear served up by horror flicks, thrill rides and even haunted houses is a specific — and in fact different — form of fear than what someone feels or deals with if they're mugged, shot at or chased by wild boars. And that's where the answer to the question — why we do this to ourselves? — lies.

First, it's important to know that there is a competing overload of various definitions (and associated nuances) of fear. Lots of people study it. Lots of people have opinions. We'll break it down into two simple types: (capital A) Anxiety, and (capital F) Fear.

Anxiety is what keeps us up at night. It's often experienced as dread. Worry. Uncertainty. Nervousness. Apprehension. And specifically, it focuses the mind on possible future events that might happen but have not yet happened: nuclear war, the end of democracy, terrorist attacks, injury or death of loved ones, a terrible breakup, the loss of finances, etc.

Fear — also described as fright, horror, terror, panic, etc. — is the much more straightforward frenemy. It derives from what is right in front of us, right now — an immediate threat to our safety. This could be a masked murderer entering our home, a rabid dog running straight for us, or that moment when we accidentally walk through a spider web. It causes significant, nearly instantaneous, fight-or-flight biological changes in us (which we'll highlight in a moment).

But further, in attempting to understand why someone would want to experience something like fear, we need to also acknowledge that it contains a subcategory, which brings about similar symptoms but with (mostly) enjoyable outcomes.

The "Fun" Behind Fear

Margee Kee is a sociologist who studies fear and is the author of the book "Scream!" She and her colleague, Greg Siegle, Ph.D., the director for the cognitive neuroscience program at University of Pittsburgh, have come up with an academic description for it: "voluntary engagement with negative high-arousal stimuli."

Or, more simply, "going to a scary movie or haunted house." And while allowing ourselves to feel the biological thrills of being scared is a part of this, the overall experience can lead to deeper meaning in our lives. In some cases, it can even provide some therapeutic value for those suffering from — you guessed it — anxiety.

Experiencing "fun scary," Kerr says, can give us "a sense of mastery over it. That can feel very gratifying. Here is a chance to feel like we've got it all within our control."

Here's how it works:

Step 1: We choose to experience a scary activity. This step, perhaps the most important, frames our entire experience. By exhibiting agency to face something scary, we are acknowledging that we are in control of it. We also realize the safety inherent in this — that if we walk into a "haunted" house, we're not going to be murdered. Not really. Right?

Step 2: Something startles us. Examples: An unseen witch makes someone stand in a very dark corner ("The Blair Witch Project"); dead twin girls demand that we come play with them forever and ever ("The Shining"); or the police tell a babysitter that the killer's calls are coming from inside the house.("When a Stranger Calls", the original).

Step 3: We experience "fight-or-flight." Danger stimuli is received by our brain, our sympathetic nervous system kicks into gear. (This is what kept the cave people away from saber-toothed lions.) Our bodies are flooded with adrenaline, dopamine, oxytocin, endorphins and more. Our heart rate, blood pressure and breathing increase. We sweat. We get goosebumps. In some cases, we scream involuntarily (or maybe voluntarily), jump and/or run for the hills. Don't worry, it's all completely natural.

The movie adaptation of Stephen King's "It" has already grossed more than $321 million since being released.
Brooke Palmer/New Line/Warner Bros.

"This is pedal to the metal and all systems go," Kerr says.

But, in a safe environment — one in which we choose to experience — it's important to note that it is much different than facing real danger. And that's what makes it fun.

"Even deciding to do scary, this is the protective frame we've created for ourselves," Kerr says. "In our mind, we are being open to engage with this material and suspend our disbelief. It creates a different experience than if we were, say, mugged at random. Our framing of the situation is then going to be with that in the context — screams mean fun and not fear."

Step 4: We experience satisfaction, on a biological level. Our parasympathetic nervous system kicks in, and it brings everything back down to normal: heart rate, breathing, blood pressure, sweating and the need to run far, far away.

"This can feel very relaxing," Kerr says. "It's the 'rest and digest' period. We're safe. We can sit with that and reap the benefits."

Step 5: The benefits: We share in the experience, and build relationships. "These experiences," Kerr says of haunted-house, horror-movie and roller-coaster excursions, "are often linked with friends and family. We attend with them. We're building strong bonds and a shared camaraderie. That in itself can be really gratifying. It's the stuff that nostalgia is built from."

So why do we choose to experience certain scary things? The rush, sure. But also to make our lives feel more meaningful. To make memories.

Kerr also notes that a common therapy for those who experience anxiety, that other brand of fear that consumes many of us these days is: Do something scary enough (but ultimately safe) to activate your sympathetic nervous system.

"It's a physical sensation that feels good," she says. "It gives you a mental pause. You become grounded in your body, fully distracted by something in your environment. And ultimately, you realize that you survived something. You set a challenge, and you survived. Which brings gratification."

These days, we'll take all the help we can get. Scary-clown movie, anyone?

Now That's Scary
Sometimes fear for fun can get a little too real. In 2016, Erebus Haunted Attraction in Pontiac, Michigan (one of the world's largest haunted houses) settled a lawsuit for $125,000 for injuries several customers sustained while touring the property.