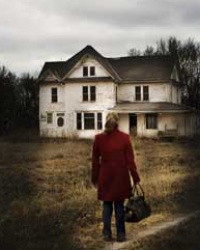 Some people might be hesitant to admit that they believe in ghosts. But if you've ever heard a chilling bump in the night when you're home alone, ghosts might not be such a leap of faith. In fact, a little more than a third of American adults believe in ghosts [source: Dolliver]. Perhaps more surprising is that 23 percent of adults polled said they'd personally seen or felt a ghost [source: Dolliver].

Every October, thousands of people pay to walk through commercial haunted houses, in which costumed actors stand in for otherworldly spirits. Customers can get the adrenaline rush of scary "monsters" popping out at them for a few minutes without any risk of getting their souls stolen or becoming possessed. But real-life haunted houses are a different story. Sure, there are plenty of paranormal enthusiasts who intentionally stay in purportedly haunted hotels and hunt for ghosts. But what if ghosts found their way into your home? If the poll results we just mentioned are accurate, the sensation of an uninvited guest isn't such an uncommon occurrence.

According to the Association for the Scientific Study of Anomalous Phenomena (ASSAP), there are some things to pay attention to if you suspect your house is haunted. Seeing apparitions, hearing weird sounds, smelling odd odors, feeling "cold spots" within a room, noticing objects that have been moved or observing your pet acting agitated are all symptoms that people report in what the association calls a "typical haunting" [source: ASSAP].

The 10 places on the following pages have certainly filled that bill, boasting enough symptoms of otherwordly presence to become the world's most notorious real-life haunted houses.