Is my brain making me buy things I don't need?

Browse the article Is my brain making me buy things I don't need? 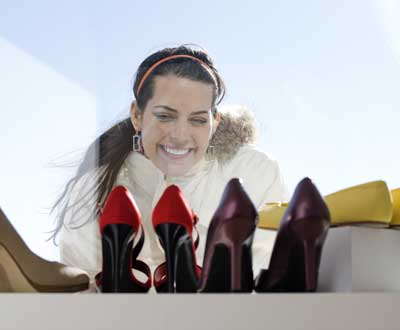 Americans like this young woman can't seem to get enough of shopping.  Is your brain to blame?
Jamie Grill/Iconica/Getty Images

If your jaw drops every month when your credit card bill arrives, as if you couldn't possibly have spent that much money and surely someone stole your card for a couple of hours and then snuck it back into your wallet without you noticing, you may not be that far off. Research published in January 2007 reveals that the brain chemistry of spenders and non-spenders, in the moments before a purchase, is so different that scientists are able to predict with pretty much complete certainty whether a person is going to buy an item or walk away from it. In essence, if you're a chronic spender, your brain is stealing your credit card and then sneaking it back in your wallet after buying a new 60" plasma TV.

Okay, so it's not exactly like that -- your brain chemistry is part of what makes you who you are. But the results of the study, published in the January 4 issue of the journal Neuron, imply that spenders have a chemical propensity to spend; and the thriftier among us experience chemical processes at the moment of potential purchase that make them far more likely to return an item to the shelf and leave the store empty handed. It's not a "get out of debt free" card, but it does help explain why some people can't seem to resist the urge to buy, while others seemingly wouldn't spend the money if their life depended on it.

­ Most of us like to believe that we make rational, conscious decisions about what we're going to purchase (the author actually has too many pairs of boots to maintain this belief, but let's call her the exception), and that these decisions are based on a combination of desire for the product and consideration of its cost. What a group of economists from Carnegie Mellon and psychologists from Stanford discovered is that desire and cost are indeed prominent factors in purchasing decisions, but that these decisions aren't necessarily all that rational or conscious. They appear to be first unconscious and emotional.

On the next page, we'll see how scientists can predict a person's shopping habits.

Predicting Purchases in the Brain

To test the subjects' shopping behaviors, the study group gave 26 subjects $40 in cash each and stuck them in an MRI machine one at a time. Inside the machine, the researchers showed each subject a series of product images followed by an image showing the price of the product. If the subject chose to buy the product, its price was deducted from the $40 and it was shipped to them. Whatever was left of the $40 after the MRI shopping session, the subject got to keep.

The results were so standardized that the researchers were a bit stunned. When a product image flashed, the area of the brain called the nucleus accumbens lit up if the subject liked what he or she saw. That means there was increased neural firing in that area of brain, which is the "pleasure center" of the brain with lots of dopamine receptors that make for feelings of happiness and excitement in anticipation of a nice event. This is the first result: The nucleus accumbens experiences an increase in activity -- an anticipation of pleasure -- when consumers like what they see.

The second image, the one showing the price, triggered a different part of the brain, and it's this brain activity that let researchers know if the subject would buy the product before the subject was even aware of having made a decision. When the price appeared, the insula either lit up, or it didn't. The insula is sort of the opposite of the pleasure center. Its neurons start firing when you realize you're about to slam your finger in a door, for instance. When the insula lit up, the subject ultimately decided not to buy the product. When the insula did not light up, and the nucleus accumbens had been activated on viewing the product, the subject eventually decided to buy it. This is the second result of the­ study: When neurons start firing in the insula, the decision not to make the purchase has been made on an unconscious level, based on the anticipation of pain. The conscious decision comes a bit later, and it always follows the unconscious decision made by the insula.

The problem for some subjects was that insula almost never lit up, and they went home with none of the $40 cash they'd been given at the start of the experiment. These, most likely, would be the people with the jaw-dropping credit card bills. Or 12 pairs of black pumps. The researchers plan to perform a similar study involving people with compulsive-shopping habits to see how their brains compare to the general population.

For more information on the brain's "shopping center" and related topics, check out the links on the next page.