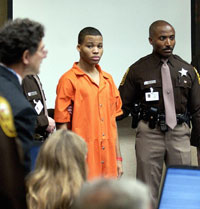 Lee Boyd Malvo is escorted by deputies as he is brought into court to be identified by a witness.
Photo courtesy Davis Turner/AFP/ Getty Images

­Another "insanity by brainwashing" defense hit the courtroom ­30 years later, when Lee Boyd Malvo stood trial for his role in the 2002 sniper attacks in and around Washington, D.C. The 17-year-old Malvo and 42-year-old John Allen Muhammad killed 10 people a­nd wounded three in a killing spree. The defense claimed that the teenaged Malvo was brainwashed by Muhammad into committing the crimes, which he would not have committed if he weren't under Muhammad's control. According to "The Brainwashing Defense" in Psychology Today:

­Muhammad pl­ucked 15-year-old Malvo from the Caribbean island of Antigua, where his mother had abandoned him, and brought him to the U.S. in 2001. An army veteran, Muhammad filled the teen's head with visions of an impending race war and trained Malvo in marksmanship. He isolated Malvo, steeped him to his own idiosyncratic, vitriolic brand of Islam and imposed a strict diet and exercise regimen on his "adopted" son.

There seems to be a contrast between an underlying fear of brainwashing in modern society, as seen in contemporary films and literature, and the apparent belief of many people who sit on juries that brainwashing is hogwash. Maybe it's the "it could never happen to me" reaction, or maybe it's just a general reluctance to absolve a criminal of responsibility for his or her crime. Whatever the cause, people seem to distinguish between brainwashing now and brainwashing in the future, the latter of which appears to be the more fearsome of the two. The future of brainwashing, if Hollywood and the conspiracy theorists are to be trusted, involves much more high-tech approaches. And yes, brain implants are arguably a lot scarier than verbal or physical "assaults on identity." If some evil branch of neurosurgery can get it right, we're all doomed to be puppets of the state. Combined with hypnosis techniques, a brain implant might be all that's needed to control a human being's thoughts, actions and beliefs. But most scientists agree that the field of neurology is nowhere close to that level of understanding of the human brain. Likewise, many psychologists believe that large-scale brainwashing -- via the mass media and subliminal messages, for instance -- is not possible, because the thought-reform process requires isolation and absolute dependence of the subject in order to be effective. It's just not that easy to change a person's core personality and belief system.

For more information on brainwashing and related topics, check out the links below.