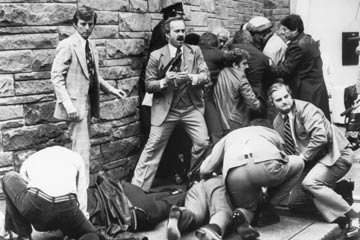 Agents tend to presidential secretary James Brady after he was shot by John Hinckley Jr. during an assassination attempt on Pres. Ronald Reagan.
© Bettmann/CORBIS

There is no single standard for considering an insanity defense in American courts of law. Individual states typically operate under one of two tests.

The M'Naghten test, developed in the U.K. in the 1840s after the Scotsman was originally set free, concentrates on a defendant's cognitive ability to understand that his actions are wrong. But the American Law Institute's (ALI) insanity test -- developed in 1962 and laid out in the Model Penal Code -- also considers what experts call the "irresistible impulse": a defendant's inability to refrain from doing something he knows is wrong. Under this test, a person is criminally insane if he is unable to "appreciate the criminality of his conduct or to conform his conduct to the requirements of the law." For example, a murderer who takes steps to avoid getting caught -- using gloves to prevent fingerprints or disposing of the body where it's unlikely to be found -- shows he's aware of the gravity of his crime, but may still be "insane" under the ALI standard. [sources: PBS, FindLaw].

The Insanity Defense Reform Act of 1984 was born out of the public outcry that followed. The law, which applies to federal criminal courts considering an insanity plea, moved away from the ALI test to something more akin to the M'Naghten standard. Specifically, the law limits the defense to a person who "was unable to appreciate the nature and quality or the wrongfulness of his acts," and explains that "[m]ental disease or defect does not otherwise constitute a defense [sources: U.S. Department of Justice, PBS].

Perhaps more significantly, other post-Hinckley legislation -- federal and state -- shifted the burden of proof in an insanity defense from the prosecution to the defendant. In the new regime, prosecutors no longer need prove beyond a reasonable doubt that a defendant was sane at the time of the crime. Rather, the defendant must provide "clear and convincing evidence" that he was legally insane [sources: US Legal, PBS].