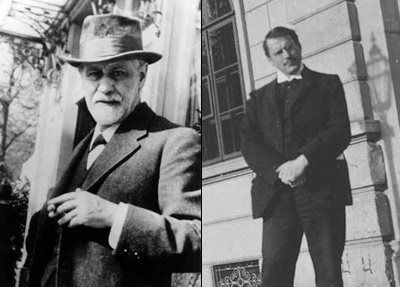 Physiological theories are based on the idea that we dream in order to exercise various neural connections that some researchers believe affect certain types of learning. Psychological theories are based on the idea that dreaming allows us to sort through problems, events of the day or things that are requiring a lot of our attention. Some of these theorists think dreams might be prophetic. Many researchers and scientists also believe that perhaps it is a combination of the two theories. In the next section, we'll look at some of the major dream theorists and what they say about why we dream.

First and foremost in dream theory is Sigmund Freud. Falling into the psychological camp, Dr. Freud's theories are based on the idea of repressed longing -- the desires that we aren't able to express in a social setting. Dreams allow the unconscious mind to act out those unacceptable thoughts and desires. For this reason, his theory about dreams focuses primarily on sexual desires and symbolism. For example, any cylindrical object in a dream represents the penis, while a cave or an enclosed object with an opening represents the vagina. Therefore, to dream of a train entering a tunnel would represent sexual intercourse. According to Freud, this dream indicates a suppressed longing for sex. Freud lived during the sexually repressed Victorian era, which in some way explains his focus. Still, he did once comment that, "Sometimes, a cigar is just a cigar."

Carl Jung studied under Freud but soon decided his own ideas differed from Freud's to the extent that he needed to go in his own direction. He agreed with the psychological origin of dreams, but rather than saying that dreams originated from our primal needs and repressed wishes, he felt that dreams allowed us to reflect on our waking selves and solve our problems or think through issues.

­More recently, around 1973, researchers Allan Hobson and Robert McCarley set forth another theory that threw out the old psychoanalytical ideas. Their research on what was going in the brain during sleep gave them the idea that dreams were simply the result of random electrical brain impulses that pulled imagery from traces of experience stored in the memory. They hypothesize that these images don't form the stories that we remember as our dreams. Instead, our waking minds, in trying to make sense of the imagery, create the stories without our even realizing it -- simply because the brain wants to make sense of what it has experienced. While this theory, known as the activation-synthesis hypothesis, created a big rift in the dream research arena because of its leap away from the accepted theories, it has withstood the test of time and is still one of the more prominent dream theories.

Let's look a little deeper into what actually happens in the brain when we dream.

According to Nietzsche, "In the ages of the rude beginning of culture, man believed that he was discovering a second real world in dream, and here is the origin of all metaphysics. Without dreams, mankind would never have had occasion to invent such a division of the world. The parting of soul and body goes also with this way of interpreting dreams; likewise, the idea of a soul's apparitional body: whence all belief in ghosts, and apparently, too, in gods."