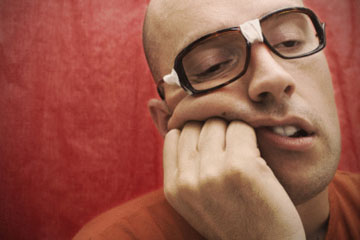 If you have plans to take a long trip that involves flying across several time zones, you already may be dreading that exhausted, sleepless, irritable feeling that results when your body is forced to reset its internal rhythms. Jet lag, also known as desynchronosis, can cause insomnia, daytime sleepiness, loss of concentration and alertness, fatigue, irritability, disorientation, depression and gastrointestinal ills [source: Eastman and Burgess]. Unfortunately, it afflicts almost everybody. A 1998 study found that 94 percent of Americans who fly long distances suffered from jet lag, and 45 percent considered their symptoms severe [source: James].

Jet lag makes many of us miserable, but it's more than just unpleasant. The Pentagon worries that jet lag will impair pilots' performance and endanger soldiers on missions, and companies worry that jet-lagged executives may not bring their "A" game to meetings and make bad deals as a result [source: Eastman and Burgess]. Those worries are justified. According to a 2010 study by University of California researchers, the brains of hamsters subjected to chronic jet lag created new neurons at about half the rate of normal stay-at-home members of their species, and showed memory and learning deficits as a result [source: Sanders].

There's growing evidence that jet lag may even harm your health, particularly as you age. A 2006 University of Virginia study, for example, found that while younger mice were able to rebound from the effects of air travel, being subjected to the equivalent of a Washington-to-Paris flight each week increased the death rate among older rodents [source: Wilber]. Other research indicates that jet lag can aggravate menstrual discomfort and even contribute to the development of heart disease and diabetes by altering eating patterns [source: Eastman and Burgess].

So what's a weary traveler to do? Over the years, people have experimented with all sorts of remedies, from jogging to trying to fight off sleepiness with frequent doses of caffeine, to various herbal and food-supplement remedies. While the magic bullet that would totally eliminate jet lag remains elusive, health experts say there's a lot you can do to help your body adjust to travel between time zones and to feel your best, no matter where you land. But first, here's some information on what causes jet lag, and why it makes us so miserable.

We have groupings of interacting molecules in cells throughout our body that act as biological clocks, telling our glands when to release hormones and adjusting our body temperature and other variables. Just as the world's watches and bell towers all rely upon the Royal Observatory in Greenwich, UK, the body's tiny biological clocks follow a master timepiece -- 20,000 nerve cells called the suprachiasmatic nucleus, or SCN, located in the brain's hypothalamus region [source: NIH].

The SCN keeps your body operating on a regular pattern of sleep-wake cycles and body functions known as a circadian rhythm. When it's time to get some sleep, for example, the natural time-keeping system releases a hormone called melatonin, which makes us go beddy bye. The SCN knows when it's a good time to do this because it's located conveniently close to the optic nerves, which relay the perception of light from the eyes to the brain. Basically, when there's less light, the SCN tells you to release more melatonin, and you nod off. But the body also likes regularity, so this natural clock gets accustomed to going off at the same time every night [source: NIH].

But your body's timekeeping system has trouble drastically resetting itself that quickly, and when you cross multiple time zones, you get all messed up as a result. The problem is at its worst when you fly eastward, say from Chicago, in the United States, to Paris, France. When it's nighttime at your destination, your body still thinks it's late afternoon. You may wind up lying sleepless in your hotel bed all night, and finally doze off just when it's time to get up for lattes and croissants [source: Eastman and Burgess].

You feel rotten because sleeplessness disrupts just about every biological function in the body. It causes the release of stress hormones, which make you feel anxious and grumpy. It drives up your blood pressure, and sends inflammation-stimulating chemical markers flooding through your arteries. The shift also disrupts the release of appetite-regulating hormones, so that you get a craving to scarf down a lot of food at a time when you normally don't eat at all. And finally, it disrupts your body's regular release of melatonin, which in addition to inducing sleep helps regulate other hormones and protects you against diseases such as cancer [source: Stein]. 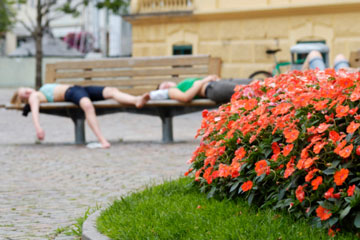 What the Experts Recommend

If you're expecting a simple, just-pop-a-pill solution for jet lag, we hope you're not too disappointed to discover that it doesn't yet exist. But if you're determined to beat the travel blues, try a regimen advocated in a 2009 article by biological rhythms researchers Charmane I. Eastman and Helen J. Burgess of Chicago's Rush University Medical Center. They suggest gradually readjusting your rhythms prior to a trip, using a light box, a device that exposes you to simulated sunlight. To phase-advance on a west-to-east trip, go to bed an hour earlier for several nights before the flight. Awaken earlier, and use the light box to get a dose of brightness. Conversely, to handle an east-to-west journey, stay up a couple of hours later for several nights before the trip, using the light box at your normal bedtime to stimulate you. Upon awakening, avoid bright light for several hours. If you have to go outside, wear dark glasses [source: Eastman and Burgess].

Eastman and Burgess also suggest using melatonin, a supplement that's not FDA approved but which has been shown in studies to help alter circadian rhythms. To aid in west-to-east phase advance, take 0.5 mg. about four and a half hours before bedtime, and progressively move the doses earlier in the day as you start going to bed earlier. For an east-to-west trip, reverse the process [source: Eastman and Burgess].

If that sounds too complicated, you may prefer the U.S. Centers for Disease Control and Prevention's tips for minimizing circadian woes. The CDC suggests that you keep up on your exercise regimen, eat a balanced diet and get enough rest in the weeks before a trip, apparently in the belief that a healthy lifestyle will help you to rebound quicker from the rigors of travel.

While you're in the air, the CDC recommends avoiding alcohol and caffeine, both of which can have disruptive effects upon sleep, and drinking plenty of water. The CDC also advises you to wear loose, comfortable clothing and to move around in the cabin when you have the opportunity. Finally, CDC suggests not stressing out about jet lag. Instead, if possible, simply adjust your schedule so that you don't to have any crucial meetings or big decisions to make until you've had a couple of days to regain your mental acuity [source: Yanni].