Placebos: Is It All in Your Head? 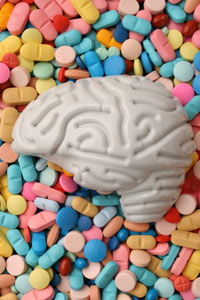 Is it all in your head?
©iStockphoto.com/ FotografiaBasica

One theory behind the placebo effect is the subject-expectancy effect. When people already know what the result of taking a pill is supposed to be, they might unconsciously change their reaction to bring about that result, or simply report that result as the outcome even if it wasn't. Others believe that people who experience the placebo effect have become classically conditioned to expect relief when they take medication. Remember Dr. Ivan Pavlov and the dog that salivated when it heard a bell? In the case of people and placebos, the stimulus is the medicine (or what's perceived to be medicine) and the response is relief from their symptoms.

The subject-expectancy effect and classical conditioning are pretty similar. In both, the patient has a built-in expectation of the outcome. The subject-expectancy effect, however, is subjective because it's based only on what the patient reports. But there have been measurable physical responses associated with taking a placebo, which lends strength to the classical conditioning theory.

In a 2002 study conducted by researchers at the UCLA Neuropsychiatric Institute, two groups of patients received experimental antidepressants, while the third was given a placebo. After several weeks of taking pills, each group's brain activity was measured using electroencephalography (EEG). The patients who had been on the placebo and reported a positive effect showed a greater increase of brain activity than those who had responded well to the drug. That activity was also centered in a different area of the brain, the prefrontal cortex [source: Leuchter]. The outcome of the UCLA study suggests that the brain isn't being "fooled" by a placebo after all -- it actually responds in a different way to a drug and a placebo.

Several recent studies have shown exactly how the brain responds to a placebo to decrease pain. One of the most groundbreaking was a 2004 study at the University of Michigan that demonstrated that the placebo effect is related to endorphins, the brain's own natural pain relievers [source: Zubieta]. In the study, healthy subjects were given a painful but harmless injection in the jaw while their brains were scanned by a PET scanner. The subjects were asked to rate their ­pain level and the researchers injected more or less saline to keep the pain level at a consistent rate during the brain scan. The subjects were then given what they thought was a pain reliever, and all of them experienced a decrease in their pain levels after receiving the placebo. However, they also showed a change in brain activity in the brain's opioid receptors (which receive endorphins) and its areas related to processing and responding to pain. The expectation of pain relief caused the brain's pain relief system to activate.

Susceptibility to the placebo effect might be genetic. A December 2008 study conducted in at Uppsala University in Sweden tested a small group of people who had social anxiety disorder. After a treatment consisting of a placebo, all the subjects were tested for a variant of a gene called tryptophan hydroxylase-2, responsible for the manufacture of the neurotransmitter serotonin (which is related to regulating mood as well as a host of other functions). The majority of the subjects who responded well to the placebo had two copies of this particular gene variant, while those who didn't respond to the placebo didn't. A past study had shown that people with two copies of the gene variant had less anxiety [source: Fumark].

Placebos not only have resulted in measurable effects in the brain, they've also been shown to relax muscles and nerves to bring pain and symptom relief to patients. So while the placebo effect is indeed in your head, it's not just psychological.

Let's look at how doctors and researchers use placebos next.