How can someone stay awake for 11 days? 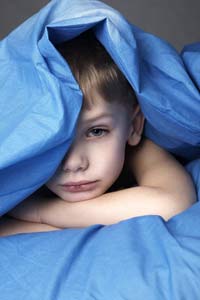 This sleepy boy has no idea why Tony Wright would do such a thing. See more sleep pictures.
Dreamstime

Have you ever pulled an all-nighter to study for a test or get a project done for work? How about doing it 11 days in a row?

A man in Cornwall, England actually went 11 consecutive days without a wink of sleep. On May 24, 2007, Tony Wright, a 42-year-old horticulturalist, claimed to have beaten the record of 264 hours (exactly 11 days) set in 1964 by 17-year-old American Randy Gardner. Wright had some practice: he had already been through more than 100 sleep deprivation experiments, the longest one lasting eight days. He also employed a unique raw-food diet. Wright claims that his regimen of salads, avocados, bananas, pineapples, nuts, seeds, carrot juice and herbal tea helped his brain stay awake. He also says that it allowed him to "switch" from one side of his brain to the other when he got tired. (Whales and dolphins are known to employ similar brain-switching techniques, which allow one part of their brain to rest while the other focuses on breathing and other basic functions.)

In order to chronicle his attempt, Wright confined himself to a live-music venue called Studio Bar in Penzance, Cornwall, and allowed a Webcam to monitor him the entire time. He also kept a blog for the BBC, though he stopped blogging on the tenth day because he found it too difficult to write coherently. The public visited Wright at the Studio Bar or kept track of him through his Webcam.

Though it's believed that Wright broke Randy Gardner's sleep deprivation record, the Guinness Book of World Records no longer acknowledges sleep deprivation attempts because it feels that they're too dangerous. Some have also claimed that Gardner's record had already been broken by Toimi Soni of Finland, who went 276 hours without sleep, and that the record was in the Guinness Book until they removed the category entirely in 1989 [source: The Times].

The health risks of prolonged sleeplessness are potentially severe. After five days, Wright wrote in his blog that he saw "giggling dancing pixies and elves" in place of the text on his computer screen [source: BBC]. He had difficulty understanding the speech of others and developed blisters on his feet, although those were due to long sessions of playing pool with various friends and visitors. However, after 11 days, Wright told reporters, "I do not feel tired yet. There is a bit of adrenaline pumping around" [source: The Scotsman].

The Effects of Sleep Deprivation

Tony Wright seemed to handle 264-plus hours of sleeplessness without significant adverse effects, but doctors strongly recommended that no one try such an experiment on his own. Long-term sleep deprivation can cause vision problems, hallucinations, paranoia, mood swings, difficulty communicating or understanding others, a compromised immune system and depression.

There's also the question of why anyone would want to stay awake for 11 days. Wright claims that he was researching the effects of sleep on the body and that he wanted to "bring attention to changing variables in human lifestyle" [source: BBC]. But some scientists have criticized his effort. Dr. Chris Idzikowski, director of the Edinburgh Sleep Centre, said that "unless it is properly conducted with equipment to monitor brain activity and to prove the subject is awake, studies like this add little" [source: The Scotsman]. Dr. Irdzikowski told the BBC that Wright's theory about switching from one side of the brain to the other could only be verified by monitoring brain activity, and that someone participating in a self-conducted sleep deprivation experiment may nod off for short periods without even realizing it [source: BBC]. In fact, on day seven, Wright wrote on his blog that some Webcam viewers had become concerned that he had fallen asleep (or worse) because he appeared to be sitting still. Wright claimed that he was "merely pondering one's creative insights (or in this case lack of them)" [source: BBC]. Whether he had unknowingly nodded off cannot be confirmed.

Problems can arise even from small bouts of sleeplessness. Twenty-four hours without sleep can produce as much impairment as being legally drunk. Consequently, sleep deprivation is a major contributor in car accidents and may have contributed to disasters such as the explosion at Chernobyl and the Exxon Valdez crash. Sleep deprivation is also a major concern for people who work long hours (such as doctors and night-shift employees) and for anyone suffering from sleep apnea, which causes high blood pressure, stress and low oxygen levels in the blood. Repeated sleep deprivation can increase your appetite and lead to weight gain.

A new group of drugs aims to eliminate the side effects of short-term sleep deprivation. Called eugeroics, these stimulants promise to boost cognitive performance after 36 or more hours without sleep. Some of these drugs have been used to treat narcolepsy. Their manufacturers, pending FDA approval, hope to adapt them for other purposes, such as allowing people to get by on a few hours of sleep a night or to put in extra-long shifts. Whether these drugs represent the future of how people live and work -- and let's hope they don't -- remains to be seen. They certainly don't replace sleep, and their effects, especially after long-term use, need to be studied closely.

Of course, sleep is a very important function. While we sleep, our muscles and cells rest and rejuvenate, which allows the brain to "archive" memories and improving cognitive function during waking hours. Most adults manage well on seven to eight hours, although some public figures, such as Margaret Thatcher and Winston Churchill, have boasted of sleeping only four hours a night or less. All animals have to sleep, too. Giraffes sleep less than two hours a day, while pythons snooze through three-fourths of the day. In the end -- for humans, at least -- it depends on the individual's needs. As babies we often sleep up to 20 hours a day, but by old age, we may be getting by on six or seven.

For more information about sleep deprivation, how sleep works and a link to Tony Wright's blog, please browse the links on the next page.