Why are demons blamed for sleep paralysis? 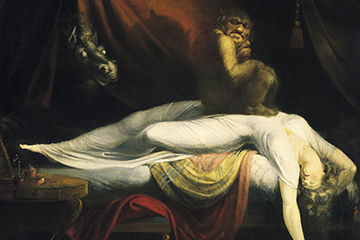 In "The Book of Imaginary Beings," Jorge Luis Borges describes a Chinese myth in which reality and the world beyond the mirror are separated by an uneasy truce. When that truce inevitably breaks, the strange denizens of the specular world will spill back into our own -- and a gleaming fish of unnatural color will be the first to break through the looking glass.

The experience of sleep paralysis is very much like a glimpse of that portentous fish. It distorts the line between the world of unconscious dreaming and our conscious experience of reality. Because, indeed, there's a biological truce between sleep and wakefulness.

And when it breaks? That's when the demons creep in.

That's the plan, anyway: The demons stay in their unconscious cage, safely removed from our conscious reality. But sometimes this safety feature of REM sleep malfunctions. The brain wakes up, but the body remains paralyzed in "safe mode."

Imagine waking up in such a state, either shortly after falling asleep (hypnagogic sleep paralysis) or in the twilight stillness of the morning (hypnopompic sleep paralysis): You can't move. You can't talk. You may feel the weight of some alien body pressing down on your chest -- or even kinesthetic sensations, such as feelings of being dragged from your bed, vibrating, flying or falling.

And then there are the hallucinations -- the true, terrifying colors of Borges' mirror fish ripped from the world of dream into our own. Because both the hypnagogic (falling asleep) and hypnopompic (waking) states are highly susceptible to hallucination. In the former, the descending rational mind tries to make sense of nonlinear dream images. In the latter, the emerging dream-mind tries to make sense of real-world sights and sounds in the surrounding environment.

The hypnopompic state is often accompanied by vivid, lingering imagery -- and it's the stuff of dreams, so the dreamer's sexual fantasies, belief system and pop culture are likely to color the visions and sensations ripped from the dream world.

Finally, imagine all of this hallucination and bodily sensation wrapped around a strong sense of presence -- the unmistakable and primitive sensation that a menacing being or entity has invaded your space.

Now you might wonder why such an encounter has to be malevolent. Why don't those dreams of Jon Hamm or Scarlett Johansson snuggle fests ever follow us into the experience of sleep paralysis? It's largely a combination of situational and individual factors.

The experience itself is typically one of paralysis, labored breathing and an inability to speak -- attributes rarely associated with a comforting embrace. But then the person's cognitive style, distress sensitivity and supernatural beliefs may exasperate the experience's negative connotations [source: Cheyne and Pennycook]. But to be sure, not every sleep paralysis experience is traumatizing. People with a more analytical worldview tend to experience less post-episode distress, and those who repeatedly experience sleep paralysis sometimes come to roll with the experience, or transcend it into a more lucid, positive encounter.

I've asked you to imagine these things, but perhaps you don't need to. Depending on who's serving the stats, between a third and a full half of the general population has experienced sleep paralysis [source: Sacks]. The exact cause and psychological process of sleep paralysis remain somewhat elusive, but studies confirm that attacks are particularly likely if the sleeper enters REM sleep quickly after hitting the pillow, bypassing the stages of non-REM sleep that usually happen first. Stress and sleep pattern disruption also can affect the chances of such seemingly unnatural visitation.

It should come as no surprise, then, that accounts and mythologies of malevolent sleep visitations permeate every human culture.

On the next page, we'll ponder the demonic explanations. 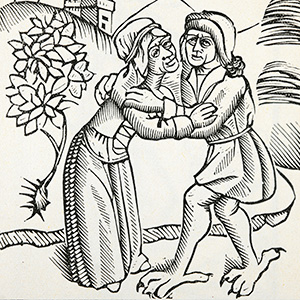 The feet of an incubus from a 1489 woodcut.
DeAgostini/Getty

We tend to think of "nightmares" as mere dreams of a particularly disturbing or frightening power, but the etymology of the word delivers us directly into the terror of sleep paralysis. Mare stems from mara, the Anglo-Saxon word for "crusher," a stark reference to that typical sensation of some entity asquat upon the sleeper's chest.

The maras of Anglo-Saxon folklore were small imps or goblins, much like the squatter in Henry Fuseli's iconic 1781 painting "The Nightmare."Other cultures, both ancient and modern, adapted differing descriptions. In Newfoundland, Canada, the Old Hag suffocates the sleeper with her hideous, hoary bulk, while the Greek Ephialtes leaps upon its slumbering prey like a great and loathsome frog.

Each culture has its own rules and expectations in place for these entities of sleep paralysis, each drawing on different worldviews, fears and supernatural beliefs. Sometimes, there's even a precautionary system in place, such as placing iron nails under your mattress to deter the French Cauchemar or employing a dream-eating Baku in Japan.

The incubus or "that which lies upon" is a masculine, shapeshifting demon that takes the form of an attractive man to engage sexually with a female victim. The succubus or "that which lies beneath," serves as the feminine counterpart, preying upon male victims in the guise of a beautiful woman. In both cases, however, a pair of bestial feet was present to alert faithful Christians to the infernal con.

According to 15th-century Bishop Alonso Tostado, the incubus and succubus were simply two forms of the same demonic entity. Tostado theorized that a succubus lies with a man in order to collect his semen and then morphs into an incubus to fertilize a female with the ill-gotten seed. In other words, it's all an elaborate artificial insemination scheme to produce satanic children.

Demon-on-human sex was a subject of surprising complexity in 15th-century Europe. On one hand, as much as half of the general public experienced sleep paralysis, confounded by sexual dreams and nocturnal emissions in both sexes. Remember, the terror of the sleep paralysis experience is due to combination of combination of situational and individual factors.

Throw in a religious script of sexual impurity and a rich tapestry of witchcraft theory and you have quite a recipe for a scandalous demonic encounter.

Sleep paralysis can prove terrifying. Even a single experience can resonate throughout a person's lifetime, and humans throughout history have aimed to give the malevolent, hallucinatory presence at its heart a name, a cause and a purpose within the fabric of their own worldview.

And thus they glimpse their demon in the dark.

Author's Note: Why are demons blamed for sleep paralysis?

Sleep paralysis is a key stop in many skeptical examinations of supernatural experience -- and the "experience" part is key. There's no doubting the severity or indeed the subjective reality of a sleep paralysis "encounter" with a demon, alien, ghost or other presence. But these hallucinatory attacks also underline how thin the line really is between our sensory experience of the reality -- which is itself a kind of hallucination -- and the sort of sensory experience we so easily categorize as magic and madness.