You Can Read Scrambled Words — Under Certain Conditions

While this meme has made the rounds online, citing a study from Cambridge University, we've discovered this study doesn't actually exist — and the meme isn't very accurate, either. However (or should we say "hwovere"), there is some applicable commentary on the topic from Nottingham University.

In a May 1999 letter to New Scientist magazine in 1999, Nottingham University grad Graham Rawlinson posited that randomizing the letters in the middle of words had "little or no effect" on the ability of readers to understand the words, so long as the first and last two letters of the word were correct. This is probably the kernel of truth behind the meme.

Other than that, the meme is rife with inaccuracies. For starters, letter order does matter. It greatly affects the readability of text. One small study tracked eye movements of 30 college students as they were presented with sentences that had transposed letters. Researchers found the jumbled letters decreased reading ability by 12 percent for letters that were switched in the middle of a word. If letters were transposed at the end of a word, the reading rate dropped 26 percent and if the mix-up occurred at the beginning of a word, the reading rate plummeted by 36 percent.

Our ability to extract meaning from words jumbled in the middle is related to our ability to infer context. According to Marta Kutas at the Center for Research in Language at the University of California, San Diego, context allows us to activate areas of our brains that correspond to what we expect. Scan someone's brain while they hear a sound that makes them anticipate another specific sound and you'll see the person's brain act as if it's already hearing the expected sound. The brain is gathering just enough information to interpret the word you're eyeballing.

The same concept applies to letters and words. Our brains process all the letters of a word simultaneously and uses the letters as context for each other. This is why we also can read words that have NUMB3RS 1NST3AD 0F L3773RS. The numbers' similar appearance to letters, as well as the overall context, overpowers their individual status as numbers.

You can read jumbled words, you'll just need a little bit longer to figure them out.

One in Six Say They'd Rather Die 'Young.' What Age Is That? 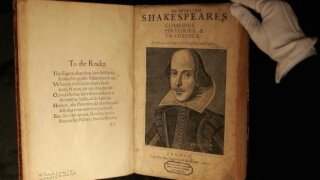 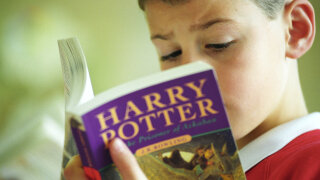 Hold Thy Horses: Shakespeare's First Folio Is Touring the U.S.