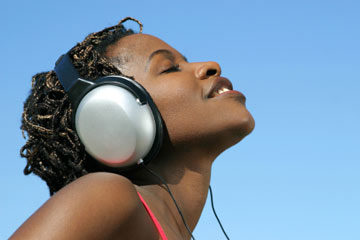 The concept that music is capable of evoking emotions in the listener is foregone, but exactly why this happens remains up for debate.
©iStockphoto.com/lisegagne

Humans are rather clever animals. We've managed to teach ourselves how to express ideas through written words, as well as emotions through art and music. Think about that for a minute. Through our art and music, the emotion felt by an artist may be encoded through color, shadow and harmony to be decoded and experienced by an observer or listener. That is arguably one of humanity's greatest accomplishments.

And yet, despite the apparent ease with which artists or musicians can create a work that unlocks emotions in the audience, we have no idea how it does such an amazing thing. We do know that emotions may be expressed in art -- and that humans can readily recognize them. One study, conducted in Germany, found that indigenous Mafa tribespeople from Cameroon were able to reliably identify the emotions of happiness, sadness and fear in Western-style music [source: Fritz, et al]. How music and art evoke emotion is another matter entirely -- one that we have yet to understand.

The renowned cognitive psychologist and linguist Steven Pinker famously called music "auditory cheesecake," indicating that music is an example of humans learning to exploit our emotions just as cheesecake is the result of our exploitation of our taste buds [source: Carroll]. Both are comparatively hollow in contrast to the underlying, elementary foundations -- language and taste -- that each is based on. In other words, there's no mystery to how art and music evoke emotions; they're designed to do so by assaulting the audience's basic communicative instincts.

Not everyone agrees with Pinker, however. Others in psychology and other fields have asserted that both music and art are separate from other innate forms of communication. This belief, however, doesn't explain why music and art can evoke emotion in the audience if it's not simply due to an exploitation of more basic senses.

Cognitive scientist Mark Changzi suggests that music creates emotion in the listener because we associate the sound with human movement. Since we're able to infer emotion from the expressions and movements of others and to empathize with those people through our own emotions, then if we associate music with human movement, this explains how music can evoke emotion [source: Changzi]. It's an intermediary, a stand-in for real human movement.

Our visual renderings of music being played indicate this unconscious association. If you carry out an image search online for the keywords "musical notes," points out Changzi, you'll find a lot of images of musical notes that depict them in motion. Humans associated music with movement [source: Changzi]. Music moves us because we envision movement in it. Even the terms we used to describe music -- that it "moves us," or a piece of a larger composition is called a "movement" -- attest to Changzi's idea.

But what about visual art? Find out on the next page.