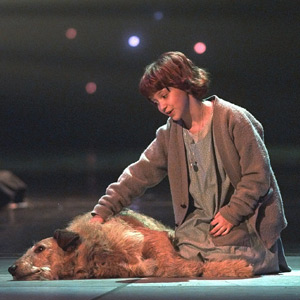 The sun WILL come out tomorrow, Annie!
Associated Press/Adam Nadel

Enjoying a musical like "West Side Story" or "Singin' in the Rain" requires believing that it's perfectly plausible for people to begin singing and dancing during moments of extreme emotion. Be it the highs and lows of teenage love in "Grease" or the determination of a plucky orphan in "Annie," musical numbers provide insight into a character's state of mind. Take "The Sound of Music," in which twirling and singing atop a mountain is enough to help a potential nun who doesn't fit in at the convent find her bliss. That character would go on to teach the miracle of singing to seven unhappy children, and not even the dastardly deeds of the Nazis could get that family down, as long as they had music.

If you find musicals like this cheesy, you're not alone. Famed linguist Steven Pinker has called music "auditory cheesecake," something that serves no purpose and happened by accident as language developed. But even the most cynical among us would have a hard time denying that hearing a favorite song can completely change our moods. That's why other scientists spend their time putting people into brain scanning machines and playing them tunes.

While music may seem like an impossible subject to study, if only because we all prefer different types, researchers are starting to determine just how ingrained into our biology the processing of music might be. Even babies enter the world with an ability to determine between different types of music. Understanding the link between a song we're hearing and how our body reacts to it could have enormous implications for treating disease and brain disorders such as depression.

While all this might seem obvious to someone who has ever used some good funk to get out of a bad funk, let's take a look at exactly what happens inside the brain when it's sandwiched between our headphones.