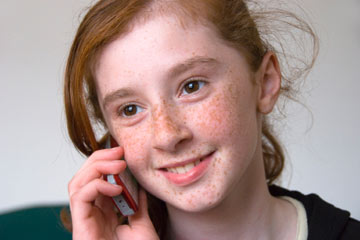 Do you find this photograph disarming or alarming? Based on the visual cues involved, we would guess the former more than the latter.
©iStockphoto.com/focusfinder

Our acquaintance with emotions is an ancient one. We've learned to use these appraisals of how our surroundings and situations match our goals, such as staying alive and preserving our health. Emotions may alert us and grab our attention, as when we feel fear and should run away. They may also assure us; we feel joy when we're safe and nourished after a meal. Understanding and reacting to our emotions is how we survive; perhaps no other sense has played a larger role in deriving emotional cues from our environment than sight.

Our ability to infer emotion from visual cues is primal. Our interpretation of these cues takes place through our emotions. If we see someone who looks cross, we may feel fear; encountering a person who looks happy may elicit a sense of calm or happiness in the observer as well. Although unproven, cognitive science suggests that visual art can evoke emotions in the viewer by exploiting emotional cues we've learned to read over the millennia [source: Gratch, et al]. A portrait of a stern-looking person of authority should elicit some sense of fear or dread in the average viewer, while a child's picture may generate happy feelings.

Certainly, studies using functional MRIs bear this out. The same regions of the brain that are involved in experiencing emotion are activated when shown aesthetically pleasing art [source: Prinz]. The use of color and symbolism -- although it can be very abstract in some works -- may still be recognizable to the viewer enough that it may evoke an emotion. This can happen even if the conscious mind isn't aware of the reason for the sudden onset of emotion. Red, for example, can indicate anger. A series of lines in disarray, like those found in the work of painter Franz Kline, can evoke uncomfortable feelings of disorder.

The color red, lines in disarray, smiling children and furrowed eyebrows are all called cognitive antecedents. By including them in visual art, the artist may encapsulate an emotional state to be decoded and experienced by the viewer later on. The emotions elicited by a work of art aren't necessarily intentional. They're often individually and culturally specific. Philosopher William Lyons points out that a Japanese viewer of the white turkeys depicted in Monet's "Turkeys at Montgeron" may experience a sense of sadness or melancholy, since white is associated with death in that culture [source: Lyons].

Perhaps an understanding of exactly how to elicit a specific emotion in the viewer is best left unsolved. To some, the best works of art are open to interpretation.