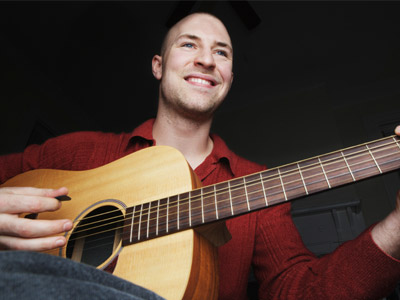 Knowledge of a musical instrument will affect the way your brain hears music.
© iStockphoto.com/bjones27

Music activates so many parts of our brain that it's impossible to say that we have a center for music the way we do for other tasks and subjects, such as language. When we hear a song, our frontal lobe and temporal lobe begin processing the sounds, with different brain cells working to decipher things like rhythm, pitch and melody. Many researchers believe that most of this action happens in the right hemisphere, though others say reducing music to a right brained or left brained activity isn't possible. Regardless of where the brain activity takes place, it does seem to differ based on a whole host of factors, including how much experience with music the person has, whether he or she is hearing live or recorded music and whether or not the music has lyrics.

If the song has lyrics, then the parts of the brain that process language, Broca's and Wernicke's areas, kick into gear. Researchers have found that songs can activate our visual cortex, perhaps because our brain tries to construct a visual image of the changes in pitch and tone. Songs can trigger neurons in the motor cortex, leading you to tap your foot and boogie. Your cerebellum gets into the act, trying to figure out where a piece of music will go next, based on all the other songs it's heard before.

Hearing a piece of music is also tied to memories: If this is the song that was playing during a first kiss, then the medial prefrontal cortex, where memory is stored, lights up. Since this is one of the last brain areas to fall prey to the ravages of Alzheimer's disease, researchers have found that people with the condition can remember songs from long ago, even when they can't remember what they did yesterday.

While many parts of the brain are involved in deciphering a piece of music, brain imaging scans appear to demonstrate that our emotional reaction to music also takes place in the brain. In a study of a woman who had damage to her temporal lobe, researchers found that while the woman was unable to distinguish between melodies, she was still able to have the emotional reaction that you might expect from hearing happy or sad melodies [source: Weinberger]. Further imaging studies have shown that music we'd expect to be happy activates the reward centers of the brain, releasing dopamine, so that music gives us the same hit of happiness that we would get from a piece of chocolate, sex or drugs.

Does that mean your radio could take the place of an antidepressant? Find out on the next page.