What are emotions, and why do we have them?

Browse the article What are emotions, and why do we have them? 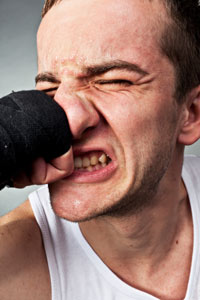 In just a moment, a physical affront to the face can elicit the emotional response of anger. See more in the emotion photo gallery.
©iStockphoto.com/Fitzer

If you're ever hit in the nose hard enough to make your eyes water, you may also notice that your skin will grow hot, your mouth will go a bit dry and your pulse will become elevated. You'll find that your head begins to swim with a strong desire to hit something in return, possibly to shout while you do. Eventually, you'll find that you've overcome this sudden influx of physical and mental stimuli. What you've just experienced -- the basic emotion of anger -- has passed.

Why a slight impact to the nose leads to a series of physiological and mental changes has long been a matter of speculation, but most psychologists agree that a basic emotion like anger exists as an evolutionary trigger. We humans -- and most other animals -- appear to be equipped with a set of predictable responses to situations. We call these the basic emotions: anger, fear, surprise, disgust, joy and sadness, as described in the 1970s by anthropologist Paul Eckman [source: Changing Minds].

Over time, this list of basic emotions has been added to, subtracted from and reshaped based on the idea that human emotions are universal. This notion suggests that for any given situation, like being hit in the nose, any individual in any culture would experience something like anger. This view of emotions as largely objective is widely accepted, although there is an emerging school of thought that believes emotions to be far more subjective: Rather than six or 11 basic emotions, there is an emotion for every possible human experience [source: SCAS].

Under almost every explanation of emotions is the premise that they're a naturally-occurring response to a situation. Whether this response is the result of our own evaluation or an automatic one remains to be seen. In the field of psychology, the view of the nature of emotions can be divided into two camps: Emotions are either the result of a judgment of any current situation or a perception of changes taking place within our bodies [source: Thagard]. In other words, when we experience disgust, it could be the result of a judgment about how we feel when we see vomit. Under the other view, we experience disgust because our body undergoes physiological changes like queasiness and increased skin temperature at the sight of vomit.

Over time, research has also separated other emotions that most in the scientific community believe are only experienced by humans and some other primates. These higher or moral emotions are based on self-awareness, self-consciousness and ability to empathize with others [source: Heery, et al]. The moral emotions are pride, guilt, embarrassment and shame [source: Simons].

Like basic emotions, moral emotions have accompanying physiological changes associated with them. But they diverge from basic emotions in that they tend to emerge after self-reflection, and they support the theory that emotions are results of judgments, rather than simply involuntary reactions to a stimulus.

Whether discussing the origin or nature of basic or higher emotions, one question remains: Why do we experience them in the first place?

Why do we experience emotions? 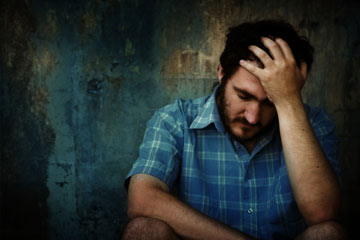 Can you tell what emotion this man is experiencing? Sure you can; emotions are considered universal social cues.
© iStockphoto.com/hidesy

Emotions may signal a change in our environment, a change within us or a change in both. These signals are generally fleeting in comparison to other states of mind. As a result, emotions are distinct from moods, which can last for hours, days or even weeks. They're also distinct from personalities, the lifelong set of traits that comprise our individual, predictable reactions to situations [source: SCAS]. It would appear that the function of an emotion is to get our attention and demand a response. Psychologists have debated whether that action is an involuntary physiological reaction or the result of judgment we've made after evaluating our current situation.

But why do we experience anger from a smack on the nose or shame from stealing?

Here, the debate ends and scientific consensus emerges. Emotions are motivators. From an evolutionary standpoint, emotions are the agents of change and reaction. Disgust is a quick, nasty response that we experience when we encounter something that might make us sick. Anger quickly transitions us from a placid state to one where we're ready to fight; fear prompts us to flee from dangerous situations. Sadness, on the other hand, can generate the resolve needed to change the direction of one's life. Emotions can also motivate us to continue what we're doing; the experience of joy is a pleasurable one, and we're motivated to carry out the behavior that led to the emotion.

Coupled with our ability to empathize with others, emotions also serve to maintain social bonds. We wear emotions outwardly -- the basic emotions are all readily apparent on a person's face -- so they serve as social signals. These allow us to interact with others' needs in mind rather than our own, which is the basis of society.

There are plenty of examples of how emotions help further society. Imagine raising offspring without the emotional attachment associated with one's own children. The feeling of loneliness leads to the emotion of sadness, which prompts us to seek out the company of others. Higher, self-conscious emotions like shame prevent us from repeating behavior that is harmful to others, like stealing.

It would seem, then, that society was able to emerge as a result of our ability to experience emotions based on our interactions with others. Or did it happen the other way around? Interestingly, the social constructionist theory of emotions says that society begins to dictate the emotional response to an individual, rather than vice versa. As a person grows older, emotions develop from knee-jerk physiological reactions to predictable, conditioned responses [source: Ratner]. In this sense, the emotions of the individual are hijacked by the expectations of the society the individual lives in, making that person more suited to live peaceably in that society.