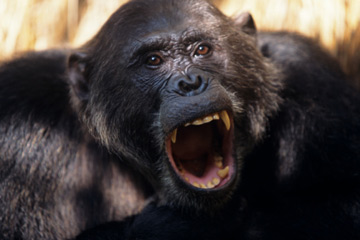 Did humans and chimps inherit a violent nature from a common ancestor?
Tom Brakefield/Stockbyte/Thinkstock

There's no denying that humans are violent creatures. From domestic violence within the home to globe-spanning wars, humans have a habit of acting on aggression. Where does this violent behavior come from? Are we hardwired with it, or do we learn this behavior? And is there any way to move beyond being a violent creature?

If you take a good look at the animal kingdom, you'll notice only a few species enact violence upon each other the way humans do. Most animals use aggressive displays to ward off competitors for food or mates without the intention of causing serious injury or death. Predators kill primarily for sustenance -- preying upon species other than their own. Two notable exceptions to this general rule are humans and chimpanzees [source: Wrangham and Peterson].

Like early humans, chimpanzees form small groups in which individuals depend upon one another. Chimps from one group may leave and join another or form their own. And chimps that grew up playing together may one day face each other in a fight to the death.

Scientists have observed chimps forming raiding parties along the borders of their own territories. A group of male chimps will patrol, searching for members of neighboring groups. If they find one, they may attack with violent ferocity, injuring or even killing their victim. Interestingly, in chimpanzee society, the males are usually the violent gender. The same is true in human society -- studies show men are involved in more violent crimes than women.

Interestingly, the chimpanzee is the animal most closely related to the human. Humans and chimps descended from a common ancestor around five million years ago [source: Wrangham and Peterson]. Is it possible our violent nature comes from this mysterious ancestor? And why would chimpanzees and humans display this sort of behavior when other primates don't?

The truth is that we don't have all the answers. Evolutionary psychologists might say that our prehistoric ancestors passed down a tendency toward violent behavior, particularly among males. But even if this is true, the full explanation is far more complicated. While violence may be part of our genetic history, so is contemplation.

Next, we'll look at the old nature-versus-nurture discussion and how we're really a product of both. 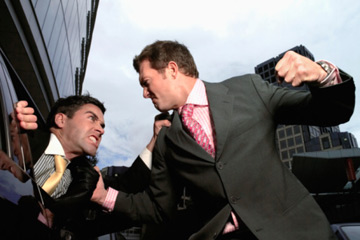 There’s a Study on That: The Stone Age Had Just as Many Lefties
Why It Feels So Good To Be Scared
Do Rainy Days Really Get You Down?