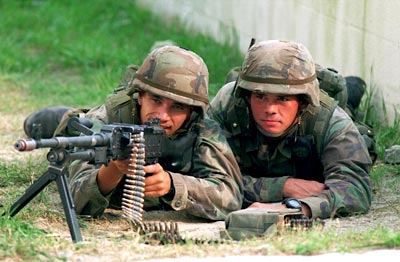 U.S. Marines fire a M-240G machine gun during training exercises at Camp Lejeune Marine Corps Base in North Carolina. Medium machine guns such as this one are an essential element in the modern arsenal.
Photo courtesy Department of Defense

To understand how machine guns work, it helps to know something about firearms in general. Almost any gun is based on one simple concept: You apply explosive pressure behind a projectile to launch it down a barrel. The earliest, and simplest, application of this idea is the cannon.

A cannon is just a metal tube with a closed end and an open end. The closed end has a small fuse hole. To load the cannon, you pour in gunpowder -- a mixture of charcoal, sulfur and potassium nitrate -- and then drop in a cannonball. The gunpowder and cannonball sit in the breech, or rear part of the bore, which is the open end of the cannon. To prepare the gun for a shot, you run a fuse (a length of flammable material) through the hole, so it reaches down to the gunpowder. To fire the cannon, all you have to do is light the fuse. The flame travels along the fuse and finally reaches the gunpowder.

Gunpowder burns rapidly when it ignites, producing a lot of hot gas in the process. The hot gas applies much greater pressure on the powder side of the¬ cannonball than the air in the atmosphere applies on the other side. This propels the cannonball out of the gun at high speed.

For more on the earliest applications of this technology, read on to the next page.