The Israeli Merkava was designed with a low hull and turret silhouette.
©2007 Publications International, Ltd.

The Merkava main battle tank was an inevitable product of those bloody early days of the Jewish State's existence and the policies of foreign powers. The State of Israel came into being in 1948, and almost immediately an alliance of Arab nations declared war. Since then, Israel has existed in a technical state of war with each of its Arab neighbors except Egypt. Israel has fought five major wars in defense of its right to exist-1948, 1956, 1967, 1973, and 1982, when Israel invaded southern Lebanon to drive out Palestinian terrorists. However, it was not until 1967 that the Israeli government turned its attention to the creation of a main battle tank.

Israel and the surrounding area are either desert or rolling hills, which form ideal tank country. During and after the 1967 War, Britain and France refused to supply certain categories of modern weapons to Israel. Alarmed, the Israeli government established a native defense industry so that state security would not be compromised by the political whims of outsiders. High priority was given to the development of a Main Battle Tank (MBT). The Merkava, which means "chariot" in Hebrew, was the result.

Design Features of the Merkava

The Merkava combines the best features of American, British, French, and (captured) Soviet tanks, all of which have been used extensively by Israel in the past. The 1967 War reemphasized that armor protection is extremely important for tanks; so much so that Israeli designers placed tank survivability first, armament next, and speed third, General Israel Tal assumed command of the tank development project in 1970 and brought a professional soldier's experience to the design process. Merkava production began in 1978, and the new tank reached service units the following year.

For a tank that does not have an autoloading main gun and carries a crew of four, the Merkava has an extremely low silhouette. Its Horstmann-style suspension system makes it one of the most mobile off-road tanks in the world today, The Merkava I and Merkava II are equipped with a 105 millimeter gun, which is small by today's MBT standards, But the Merkavas fire Hetz armor-piercing, fin-stabilized, discarding sabot rounds, which can penetrate MBT armor at ranges greater than 5,000 yards, The tank is equipped with a laser range finder that is connected to a ballistic computer that gives the tank first-round hit capability.

Israeli innovations in three other areas contribute to the Merkava's effectiveness: reactive and heavy armor, enhanced crew protection, and efficient and simple maintenance and repair procedures. Armor descriptions and thicknesses are classified, but Israeli statistics compiled after the 1982 invasion of Lebanon show that there is a 61 percent chance that a round striking a tank will penetrate; during the invasion of Lebanon only 41 percent of rounds striking the Merkava penetrated, Of rounds striking a tank, there is a 30 percent chance of penetration into the crew compartment; only 13 percent of all rounds striking a Merkava penetrated the crew compartments. This was due to the placement of the Merkava's engine up front and the thickness of the glacis armor belt. Normally, 31 percent of all hits set a tank on fire, and fire destroys the tank 85 to 90 percent of the time. Only 15 percent of all hits caused fires in Merkavas, and only one Merkava was lost to fire as far as is known.

The Merkava was designed with fully armored, self-sealing fuel tanks; fireproof containers that provide one hour minimum protection for all ammunition; and a heavily armored crew compartment. All crewmembers are required to wear protective asbestos clothing, and the tanks are equipped with an extremely fast-reacting fire suppression system built by Spectronix.

Israeli Defense Force armor records show that no Merkava was out of action for more than 48 hours, while M-60, Centurion, or T-62 tanks could require up to two weeks to repair. The battle-tested Merkava is truly a superior MBT.

Learn more about the Merkava Main Battle Tank's armor, weapons and capabilities on the next page. 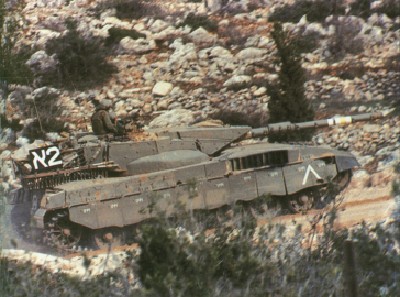 Combining the best features of American, British, French, and captured Soviet tanks, all of which have been used extensively by Israel in the past, the Merkava is the product of real battlefield experience. The 1967 War, which spurred the development of the Merkava as part of a native Israeli defense industry, demonstrated the extreme importance of armor protection to such an extent that the Merkava's design emphasizes tank survivability, armament, and speed in that order.