How is the National Guard different from the regular Army?

by Ed Grabianowski
Next 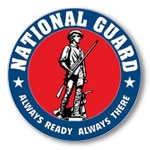 The National Guard serves a dual role. Most of the time, it’s under the control of individual states, with the state governor acting as commander in chief. However, the president can activate the National Guard and place it under federal control. When this occurs, guard units are used to supplement the regular Army, bolstering its forces with additional combat units.

Soldiers in the National Guard train one weekend each month, with one two-week training period each year. They’re typically called into action by a state governor, who can send them to the site of any officially declared emergency in the state. This is usually a weather-related emergency, but civil unrest or terrorist attacks are other emergencies they may respond to. Guard troops can also be used for security details at borders and airports. While state governors command their state’s guard troops, each state has an adjutant general who acts as a liaison, interpreting the governor’s orders into specific tactical decisions.

A Tennessee Army National Guard Soldier, who is not being identified for security reasons, uses binoculars to spot signs of illegal activity along the U.S. border with Mexico.
Photo courtesy of The National Guard/U.S. Army photo by Sgt. 1st Class Gordon Hyde

When the president federalizes National Guard troops, they can be used in domestic emergencies much like they are used in state emergencies. However, they are not limited to use within their home state. For example, National Guard units from numerous states were used to aid in Hurricane Katrina relief efforts.

Federalized Guard troops can also be folded into the regular Army, called up to active service in military operations overseas. In World War I, 40 percent of all U.S. combat troops came from National Guard units [Source: The National Guard]. In 2005, that same percentage was true of U.S. troops in Iraq, and one out of every six U.S. soldiers killed in Iraq came from a National Guard unit [Source: PBS].

The National Guard’s existence is ensured by the Constitution, which has a series of clauses outlining the states’ right to create militias and the federal government’s right to utilize those militias. These are a long chain of federal laws, the most important of which are the 1903 Militia Act and the National Defense Act of 1916. A recent law, the John Warner National Defense Authorization Act of 2007, expanded the president’s authority to activate guard units, eliminating the need for approval from the state governor.

About half of the states in the United States also maintain a state defense force. These forces are more like militias – all of the troops are volunteers, they receive no federal funding and often have to purchase their own uniforms and equipment. A state defense force is separate from the state National Guard, though they may be organized in parallel. Technically, the president has the authority to call on these state militias when needed, but in practical terms, state defense forces are largely immune to federal activation.

For more information on the National Guard and related topics, check out the following links: