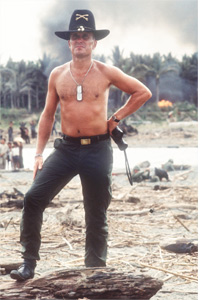 He loves the smell of napalm in the morning -- Robert Duvall as Lt. Col. Kilgore on the set of "Apocalypse Now."
Matthew Naythons/Getty Images

­Dep­ending on whom you ask, it's a noun, a verb, a chemical weapon, a tool to destroy crabgrass, a symbol of war's brutality or just a classic movie line. Napalm, with its varying forms and long history in warfare, is at once iconic and misunderstood. In this article, we'll take a look at napalm, from its origins to its contemporary use, and find out why it's known for its distinctive smell.

The security information Web site GlobalSecurity.org describes napalm as "a tactical weapon used to remove vegetative cover and instill fear." It comes from a powder that's mixed with gasoline (in some forms). Napalm, also called a firebomb fuel gel mixture, has a gel-like consistency, allowing it to stick to targets. Napalm is often used in combination with gasoline or jet fuel to make a bomb with a thin outer shell that easily explodes and ignites upon impact with a target. Once ignited, napalm can burn at more than 5,000 degrees Fahrenheit (2,760 degrees Celsius).

Military experts consider napalm particularly effective against fortified positions, like bunkers, caves and tunnels, as well as vehicles, convoys, small bases and structures. It clings to whatever it touches, creating a large, hotly burning area around the target. This feature also decreases the need for accuracy when dropping napalm bombs.

­U.S. and German forces used a precursor to napalm in flamethrowers during World War I. These weapons weren't considered effective because the flamethrowers' gasoline acted like a liquid, dripping off targets. Military leaders decided that they needed something to make fuels thicker.

The answer came from a team of scientists led by Dr. Louis F. Fieser. They created an aluminum soap mixed with naphthenic acid from crude oil and palmitic acid from coconut oil. (Take the "na" from naphthenic and "palm" from palmitic and you have "napalm"). The new agent, when combined with gasoline, made for a cheap, brutally effective weapon. It also could be shot long distances and was safer for the soldiers using it.

­Many militaries have used napalm in its various incarnations, but its use, especially in civilian areas, remains controversial. The 1980 United Nations Convention on Certain Conventional Weapons outlawed the use of napalm on civilians. Protocol III of the convention forbade the use of incendiary weapons like napalm on civilians. The United States ratified the convention but isn't party to Protocol III and has used napalm in many conflicts since the substance's invention. 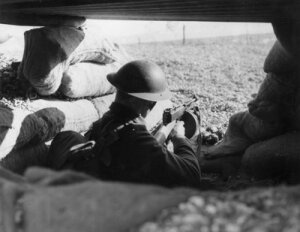