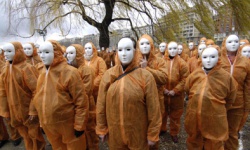 The book also discusses the most common forms of torture among them beatings, electric shocks, hanging a person by the limbs, mock executions and forms of sexual assault, especially rape.

While most of these endured horrors are physical, or black torture, mock executions are white torture (psychological) [source: Cesereanu]. There's little distinction between black-and-white forms of torture; both are equally insidious. As the humanitarian group SPIRASI (Spiritan Asylum Services Initiative) puts it, "Methods of physical and psychological torture are remarkably similar, such that one should not separate their effects from each other" [source: SPIRASI].

What follows are 10 prevalent forms of torture that prisoners throughout the world endure. In the next section, we'll examine a form of torture that's been in use for thousands of years but remains no less painful today. Before proceeding, readers, please be aware that this article contains descriptions of violence that may not be suitable for everyone.