Napalm's Effects on Health and the Environment 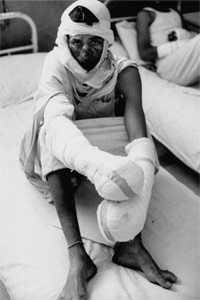 ­­Napal­­m is an enormously destructive weapon. It'­s very stic­ky and can adhere to the skin even after ignition, causing terrible burns. Because napalm burns ­so hot,­ slight contact with the subst­ance can result in second-degree burns, eventually causing scars called keloids. The burns caused by incendiary weapons like napalm are tough for doctors to treat, according to Physicians for Social Responsibility [source: Crawley].

Napalm can cause death by burns or asphyxiation. Napalm bombs generate carbon monoxide while simultaneously removing oxygen from the air. The air in the bombing area can be 20 percent or more carbon monoxide [source: GlobalSecurity.org]. This effect occurs because napalm partially combusts the oxygen in the air, turning CO2 (carbon dioxide) into CO (carbon monoxide). In some cases, people have been boiled to death in rivers made hot by the heat of napalm bombs.

The raw ingredients of napalm can also be harmful, though certainly less so than when a napalm mixture is ignited as part of a bomb. If you've ever felt a little dizzy after breathing in fumes at a gas station, you can understand. But when polystyrene, another common ingredient in napalm, burns at high temperatures, it becomes styrene, which is toxic [source: GlobalSecurity.org].

Although one of napalm's early uses was agricultural -- Dr. Fieser found that it destroyed crabgrass by burning the invasive species' seeds while preserving other, necessary grasses -- it has largely proved destructive toward the environment. Fires caused by napalm can cause widespread ­damage. In Vietnam, the U.S. military took advantage of this fact by deploying napalm to destroy forests that North Vietnamese soldiers relied on for cover. The extensive use of napalm in Vietnam, along with Agent Orange, herbicides and a variety of unexploded landmines and munitions, are now believed to have contributed to that country's ongoing environmental and public health problems [source: King].

In the United States, the storage of unused napalm has proven a contentious issue. In 1998, protesters turned back trainloads of napalm on their way to recycling plants, perhaps fearful of napalm canisters leaking, as happened at the Weapons Support Facility, Fallbrook Detachment, in Southern California. This stockpile, supposedly the last batch of napalm in the U.S. arsenal, was dismantled and recycled in 2001.

­O­n the next page, we'll take a look at the further development of napalm and its use in World War II and Korea.

What Were They Thinking?

U.K. authorities once considered using napalm to burn the corpses of thousands of animals, who were culled because they had foot-and-mouth disease. The proposal was shot down out of concern over "very toxic compounds" produced by burning napalm [source: U.K. Parliament].