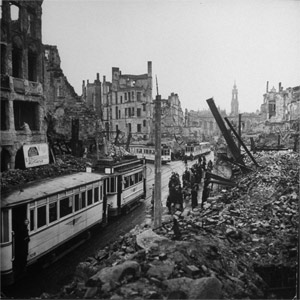 ­During World War II, U.S. forces used a 6 percent mixture of napalm in flamethrowers. Napalm bombs, a type of firebomb, became a prominent part of aerial campaigns later in the war. In 1944, Allied forces dropped the first napalm bombs on Tinian Island in 1944, which is part of the Northern Mariana Islands in the northern Pacific Ocean. Napalm devastated Japanese cities, especially since many houses were made of wood. A napalm bombing campaign against Tokyo on March 9, 1945, killed an estimated 100,000 people and burned 15 square miles (39 square kilometers) of the city [source: Laney].

Allied forces also used napalm in European fighting, with around 3.4 kilotons of napalm bombs -- up to 50 percent of bombs dropped -- falling on Dresden in February 1945 [source: GlobalSecurity.org]. The bombing, immortalized in Kurt Vonnegut's "Slaughterhouse-Five," was part of a controversial campaign in which between 35,000 and 135,000 German civilians died [source: Encyclopaedia Britannica].

­­If World War II was napalm's testing ground -- albeit a violent one that caused much destruction and loss of life -- then the Korean War was its true coming-out party. U.S. forces used a tremendous amount of napalm in Korea, ironically much of it made in Japan. During the conflict, U.S. forces dropped a quarter of a million pounds (113,398 kilograms) of napalm bombs every day, mostly in the form of the M-47 napalm bomb and the M-74 incendiary bomb [source: GlobalSecurity.org]. High-altitude bombers and dive-bombers unleashed them on enemy tanks and soldiers.

After the Korean War, the United States developed a more advanced form of napalm. This type of napalm wasn't made from naphthenic and palmitic acids (the source of the original napalm name). By then, napalm had already become a catchall term encompassing a variety of incendiary weapons, like when people say "Coke" to mean soda or "Kleenex" to stand for all facial tissues. Napalm-B, a napalm successor sometimes called super-napalm, NP2 or Incendergel, is made of 33 percent gasoline, 21 percent benzene and 46 percent polystyrene [sources: Browne, GlobalSecurity.org]. The gasoline in napalm is generally the same as that found at most gas stations, and that gasoline already has some benzene in it, but the benzene level is increased for napalm.

Napalm-B was considered safer than previous forms, although when the term "safe" is used in relation to napalm, it generally refers to those who deploy the weapon, not those against whom it's used. One of Napalm-B's safety features was that it was rather difficult to ignite, decreasing the chances of an accidental ignition. Thermite, a chemical mixture that burns at very high temperatures, is often used with a fuse to ignite Napalm-B.

Now, let's take a look at the use of napalm in Vietnam, where its controversial legacy was made.

In World War II, the German word "bombenbrandschrumpfeichen" was created in response to napalm bombing of German bunkers. Soldiers in bunkers would be baked by the heat, and the word means "firebomb shrunken flesh" [source: GlobalSecurity.org].