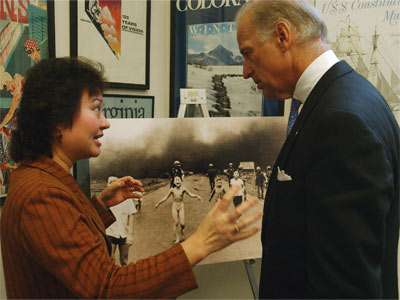 Kim Phuc, seen here with then-Sen. Joe Biden, stands in front of the famous photograph of herself as a child, being burned by napalm.
Scott J. Ferrell/Congressional Quarterly/­Getty Images

­The U.S. military used Napalm-B extensively during the Vietnam War -- up to 400,000 tons (362,874 metric tons) [source: GlobalSecurity.org]. In movies or newsreels from the era, you may have seen shots of planes diving low, then suddenly rising as enormous fireballs explode below. That's probably napalm in action. One retired U.S. Air Force Lieutenant Colonel, speaking to the San Francisco Chronicle, described the effect as "like a fiery blanket [that] burns everything that it hits" [source: Taylor].

Although the Vietnam War produced numerous images of bombs exploding and their aftermath, none is as indelible and well-known as that of Phan Thi Kim Phuc, taken by Associated Press photographer Nick Ut. Kim Phuc was 9 years old when her village was napalmed by American forces. In the famous picture, Kim Phuc and a group of children are running, fleeing their village. Phuc is naked, screaming because napalm is burning her body.

Upon realizing how hurt she was, Ut took Kim Phuc to a hospital. She survived but after enduring extensive third-degree burns and 17 operations. In her late teens and early 20s, the Vietnamese government used Kim Phuc as a propaganda tool, forcing her to speak to reporters from abroad. Eventually, she and her husband fled to Canada. She now lives in a suburb of Toronto, and although she still deals with pain from her injuries, she speaks publicly about the horrors of napalm [source: Omara-Otunnu]. She's also a U.N. Goodwill Ambassador. The photograph taken by Ut has become, along with images of burning monks, one of the most widely seen photos from the war.

The use of napalm in Vietnam helped to galvanize the antiwar movement in the United States. One target was Dow Chemical Company, which manufactured napalm for the U.S. government from 1965 to 1969. Protests against Dow and boycotts of its products occurred across the country. Company recruiters faced virulent protests on college campuses, in some cases finding themselves barricaded in buildings. In response to criticism, Dow said that it had a responsibility to the U.S. government to fulfill its requests for napalm. The company also claimed that napalm only represented a small fraction -- 0.5 percent -- of overall sales [source: BusinessWeek]. After Dow's contract expired, American Electric Inc. won the next government contract for napalm production. Some other companies that produced napalm for the government faced protests (and some did not submit bids for future napalm contracts), but no other company remains as linked with napalm as Dow.

­Although the U.S. government officially recycled its last batch of napalm in 2001, some contend that napalm is still in use today in ­Iraq. We'll examine the facts and the arguments next.