A science fiction writer might imagine a future in which a government official -- the Minister of Weather Modification, perhaps -- dials up the day's weather for his country's citizens. A drought in the West? No problem, we'll just order a few gentle showers. A hurricane threatening the East Coast? Just stay calm, folks, we'll launch a small nuke to blast the storm apart.

They say truth is stranger than fiction, and such is the case with humans attempting to control the weather. Let's start with a brief history. Numerous Native American tribes, especially those living in semiarid desert country, such as the Pueblo, Hopi and Zuni, engaged in elaborate dances to coax moisture from the rain-stingy skies. In the late 1800s and early 1900s, rainmakers roamed across the western United States, promising to end droughts for a fee.

These itinerant salesmen used a combination of pseudo-science and grand showmanship to convince communities that their technique, often a device or structure used to deliver chemicals or gases into the air, would bring rain in short order. Even the U.S. government got in on the act. In 1891, Congress appropriated $19,000 to conduct rainmaking tests in Texas under the guidance of Robert Dryenforth. Dryenforth's results were inconclusive, and as the century turned, politicians and citizens began to regard rainmakers with increasing skepticism.

It would take another four decades before the scientists involved with weather control began to overshadow the charlatans. The real turning point came in 1946, when Irving Langmuir and Vincent Schaefer, chemists working at General Electric Research Laboratory in Schenectady, N.Y., discovered that they could introduce ice crystals into a supercooled cloud and create snow. They called the process glaciogenic cloud seeding and soon enlisted the help of physical chemist (and brother to novelist Kurt Vonnegut) Bernard Vonnegut.

Vonnegut searched for another crystalline substance that would have a similar effect, and he found it in silver iodide. Over time, the team worked out the basic science of cloud seeding, which goes like this: Often, the drops of moisture in clouds can't freeze without some extra help. If these drops encounter crystals of silver iodide, they glom onto the crystals and freeze. Once the ice grows big enough, it falls from the cloud, either as snow or, if it passes through warmer air, as rain. 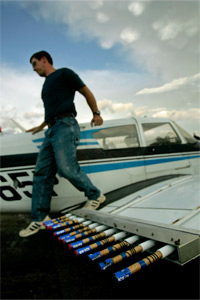 Can you predict winter weather based on summer weather?
Why does humidity make my hair frizz?
Why Is the Sky Blue?