by Mark Mancini Oct 30, 2018
The Icehotel in Jukkasjärvi, Sweden, is famous for curating huge blocks of ice straight from the Arctic Torne River. The natural ice is super clear because of the area's long cold months, snow and wind. Ben "Big Ben" Nilsson

Things have gotten chillier up in the Northern Hemisphere. Autumn's upon us once again, and winter will be making its return here on Dec. 21, 2018. With those seasons come their challenges. For example, if there's one term guaranteed to make car-owners lose their cool, it's "black ice." The National Weather Service defines this as "patchy ice on roadways or other transportation surfaces that cannot easily be seen."

To the human eye, it's all but invisible. Black ice isn't really black; it's transparent. The stuff only looks black when it's covering a layer of jet-black pavement. Accidents happen once drivers, blind to the danger, steer their cars over the ice and lose traction.

Other kinds of ice are easier to see. You've no doubt noticed that homemade ice cubes usually look cloudy and opaque in the middle, like whitish blocks of cotton candy. That stands in contrast to the frightening clarity of black ice. How come black ice is see-through, but the cubes in your typical ice trays aren't?

Liquid water appears to be clear. That's because the material does not absorb most of the visible light that passes through it. Yet there's a deceptive quality to water: No matter how fresh it may seem, it's never 100 percent pure. A sample of H2O might contain floating bits of organic matter — algae, plant remains, etc. — along with suspended sediments, dust particles or flecks of minerals like calcium and lime. It may also harbor lots of dissolved gases, such as oxygen. (Without said oxygen, fish wouldn't be able to breathe.) Gases and physical impurities are the key to understanding why those ice cubes in your lemonade pitcher are so darn cloudy.

See when water freezes, internal debris and air bubbles can become concentrated. The clusters impede light, causing all the differently colored frequencies on the visible light spectrum to scatter. When this happens, it makes the ice look white and clouded. But it doesn't always happen.

In 2014, YouTuber Tomas Nunuk filmed himself and a travel companion walking across Velke Hincovo Pleso, a deep, freshwater lake in the Slovakian mountains. His video went viral because it shows the two men standing on some unbelievably clear ice; the lake-bottom rocks below them are pristinely visible through the frozen water. The ice in Nunuk's video was so transparent that some YouTube viewers assumed the footage had been faked. But Velke Hincovo Pleso is very real, and when the lake freezes over (as it often does), the surface ice can be crystal clear.

An ice sheet needs to be almost entirely free of both air bubbles and debris in order to have this degree of clearness. There are other requirements as well. Ice is made up of crystals — and when H2O freezes rapidly, those crystals tend to be small and numerous. That makes the ice look whiter because crystals have reflective surfaces. So if there are more crystals, there'll be more reflection going on, which will help scatter incoming light. On the other hand, ice that's been slowly frozen is built out of fewer and larger crystals. And those promote transparency.

To recap, ice will only become see-through and crystal clear if it freezes slowly and doesn't have too many impurities or crystals. Tomas Nunuk's now-famous YouTube video is a case study of what it looks like when all these conditions are met. On the day of his Slovakian trek, Velke Hincovo Pleso was topped with an icy blanket that was around 2 centimeters (or 0.78 inches) thick. The water must have frozen gradually during a tranquil period with no strong winds that might've blown debris into the lake or churned up the water.

We see the same kind of thing happening in roadway black ice. Although not all of this stuff comes from the same source (it can start out as fog, mist, drizzle or melted snow), it always freezes slowly during low-wind periods, it's consistently thin and it contains very few impurities. That's why black ice is so transparent — and frustrating to motorists.

But highway annoyances notwithstanding, transparent ice isn't as common in nature as the white, clouded variety. There are a lot of reasons why a given ice chunk might not be clear. Some ice is made up of fallen snowflakes, whose angular shapes and irregular crystals scatter light. And sometimes, water just freezes rapidly, resulting in ice with smaller crystals.

Artificial ice is subject to the same physical laws. Most household ice trays are designed to freeze little blocks of water from the outside in. Doing so has the side effect of driving impurities within the water toward the center of each cube. The finished products therefore look white and hazy in the middle. To get clearer, more attractive cubes, some restaurants use expensive machines that freeze water very gradually, and exclusively from one side. That lets the impurities escape outward.

Luckily, there are plenty of cheaper ways to make transparent ice cubes. One well-known trick involves boiling the water in advance, thus ridding it of dissolved gases before the freezing process starts.

NOW THAT'S COOL
Technically, water isn't colorless (although it often looks that way). Believe it or not, the liquid has a natural bluish tint, owing to the fact that it absorbs red, yellow and orange light more easily than blue light. But our human eyes can only observe this azure quality in deep bodies of water. This helps explain why the ocean looks blue to us while glassfuls of drinking water look transparent. It's also why big, thick glaciers adopt a royal hue. 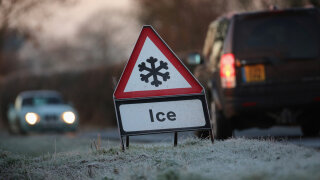 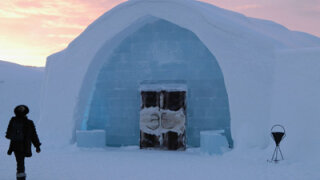 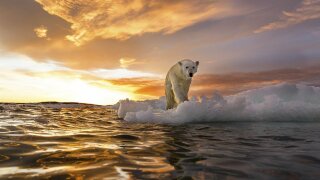 The Ambitious Proposal to Re-freeze the Arctic