How Does Dust Become Airborne? 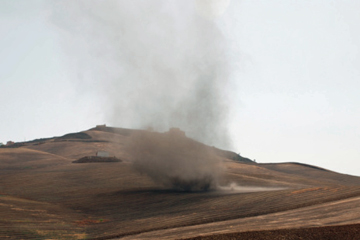 A breeze blowing at 9 miles per hour (14.5 kilometers per hour) can stir up dust on the ground. If the particles are small enough, they may become airborne.
iStockphoto/Thinkstock

Without wind, dust will generally remain on the ground. While wind is unquestionably the force that causes dust to rise, additional physical and electrical forces accelerate the process.

When wind passes over a dust source, the loosely held sand and dust particles move. When the soil is dry, it doesn't take much to get them moving; the threshold wind velocity only needs to be at about 9 miles per hour (14.5 kilometers per hour) to disrupt the surface [source: United Nations]. Of course, wind speeds this low don't necessarily create a storm, but it gives you an idea of how little force is needed to sir things up.

The way wind moves particles depends on their size and weight. The smallest particles (less than 0.002 millimeters in diameter) are easily suspended in air and the largest particles (greater than 0.5 millimeters) roll along the surface of the ground, a movement that's called creeping. It's the movement of particles between these two sizes that have the biggest impact on dust emission, however. These particles are lifted temporarily and bounce back onto the surface upwind. When they hit the surface, they bounce back up. They also cause a chain reaction to the particles around them.

Think of the particles on the surface as ping-pong balls. When one ball, propelled by a wind force, bounces onto the others it causes the other balls to bounce. Every time a ping-pong ball hits the surface, additional balls become airborne, regardless of whether wind is there or not. Of course, once airborne, the balls are susceptible to wind forces. This collective action is called saltation. Saltating particles will be lifted higher into the air depending upon their size. Dust particles, also called silt, are between 0.002 and 0.05 millimeters in diameter.

Although very small particles in suspension create their own problems, dust particles are what make most storms so hazardous. Dust can be lifted more than 700 meters (2,296 feet) into the air [source: United Nations].

The physical forces described above increase the amount of airborne dust at a given wind speed, but the effects of saltation don't stop there. Saltating particles also generate electrical energy, which increases the number of saltating particles even more. As particles hit each other and the surface, they acquire a negative charge. The surface, however, acquires a positive charge -- essentially generating a static electric field. Anyone who has rubbed a balloon against his or her head knows how hair will, without wind, fly about in suspension. A similar principle is at work here. The electrification of particles reduces the amount of wind force needed to initiate further saltation. In fact, it can directly lift particles from the surface.

Now that the dust is airborne, how high will it be suspended, where will it go and how long will it remain in the air? In the next section, we'll learn how weather systems determine what a storm will look like.